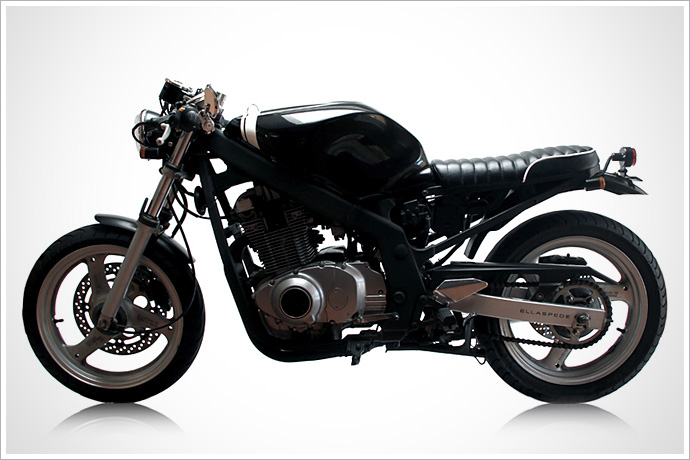 Consider if you will this mental image. Pipeburn, instead of being the super amazing blog that it currently is, is magically transformed into a warehouse. And not just any warehouse, but one that contains each and every bike that we have ever featured in these here virtual pages in the iron. Now place yourself at the open doors of this warehouse with the world’s biggest baddest, most power gun. Let’s say, for argument’s sake, it’s a phased plasma rifle in the 40 Watt range. You let rip, and almost instantly the brute power of the gun begins to tear the bikes to shreds. Firestones by the ton are ripped from arsehole to breakfast time. The pipewrap flies up into the air like streamers at a Macy’s Day parade. But you know the one bike bit you’d see nary hide nor hair of in all this supersonic chaos? The one major component that features heavily on a vast majority of bikes built since the early 80s but is rare as hen’s teeth around these parts? For those of you shouting “beam frames” at the top of you exhaust-infected lungs, congrats. You’ve just won yourselves a case of beer. Off the top of my head the only other bike in recent memory that featured a beam frame was Tyler Mill’s Honda VTR. Unfortunately the prize beer is make-believe, just like the warehouse and the gun. But that shouldn’t bother someone with an imagination as powerful as yours so sit down, crack open an invisible cold one, and enjoy the beam-framed splendor of Ellaspede’s superb Suzuki GS500. “This Suzuki was built for Tristan Schultz a local Gold Coast designer as his daily rider,” says Ellaspede’s Leo Yip. “Tristan rode in on a fairly pedestrian looking GS500 boasting a custom dolphin sticker. Armed with an array of inspirational images and strong idea of what he wanted we sat down and collaborated to create Ellaspede’s 007.” “The design intent of 007 was to develop a classic looking bike with the reliability of a modern motorcycle. Tristan specified that he wanted to retain certain aspects of the GS500 and not completely reinvent the wheel, so we tried to highlight particular elements and pare back others.” “Some of the bike’s less obvious features include a custom Ellaspede seat, slimed down dash lights and a very meaty sounding exhaust.” As a footnote, I think that this is also the first GS500 that we’ve featured here as well. Horay for a custom builder who doesn’t limit themselves to a tiny cross-section of the planet’s bikes but instead welcomes the unpopular and unloved into their open arms. It’s like the United Nations of custom bikes aroud here, I tell you. More, please.