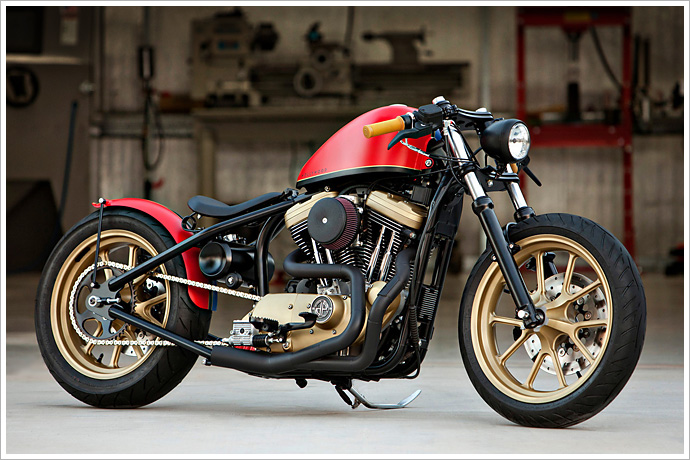 Another month and another world class Harley bobber from Jarrod and Justin Del Prado and the rest of the team at DP Customs in New River, Arizona. As with previous DP builds, this one has a racing theme, and one that which wasn’t immediately apparent to me when I first saw the bike. Here’s a very subtle clue – the bike’s nickname is ‘Hollywood’. Here’s another – if the bike wasn’t a Harley, it’d be a Nissan. Jarrod from DP Customs started with the basics. “The bike is based on a 2003 1200cc Sportster. We hardtailed it and added clip-ons for that signature DP stance. We improved performance with single fire ignition, a Big Sucker intake, and a DP Customs 2 into 1 exhaust.” Braking the beast is handled by Brembo, and the tires are Metzeler Z8; the front is a 120/70/18, the rear a 150/70/17. The trick custom speedo mount (second last photo below) is a collaboration between DP and their pal Shane at Chainsickle. Nice work. “The seat, seat mount, throttle sleeve, and grips are Biltwell units and the pegs are Burly Brand’s MX Style. The custom fork brace is by our good selves, as is the matt clear finish paint and the rest of the bodywork.” Finally, Jarrod revealed the story behind the bike. “The customer on this bike is another great guy that gave us a lot of creative freedom with the look of the bike. He liked the stance of one of our previous bikes called ‘Mele’, so his only requirements were that the bike was hard-tailed with clip-on bars. We told him we were big fans of Paul Newman and his 80’s Bob Sharp Nissans and wanted to do a similar paint scheme – blue and red with gold BBS-ish style wheels. He was in!” “We began calling the bike ‘Hollywood’ as we were building it because of ol’ blue eyes, and the name stuck. As the build evolved, we decided to add gold to the motor as well, and eventually changed the white accents in between the asymmetrical red and blue to black. Then we sort of left the Newman/Bob Sharp scheme behind and ended up building a bike that we thought would look cool cruising the streets of Hollywood at night. It’s like the name took us over.” For more on the six other Del Prado brothers bikes we’ve had the honor of posting, just enter ‘DP Customs’ in our search box and put aside at least an hour to really take them all in. Either that, or just pop over to Jed Strahm Photography, DP’s exclusive photographer, to see enough great shots of their work to last you a lifetime.