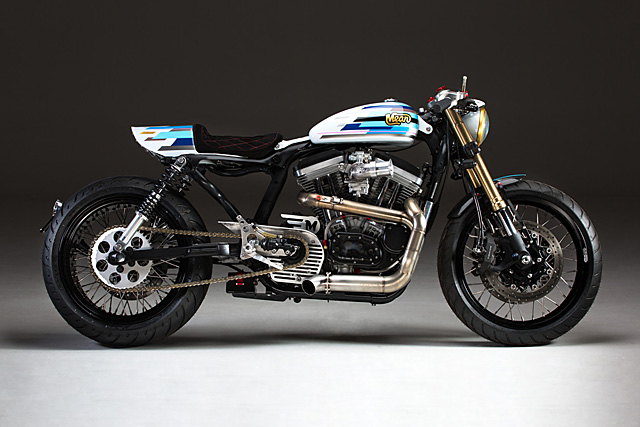 Perth’s Mean Machines are one of Australia’s leading custom bike builders. As a workshop that once built a Triumph Bonneville with a 200 section rear tyre, you always expect big things when they unleash a new machine. Well, Wenley Andrews and his crew haven’t let us down with a ‘04 Harley Davidson 883 Sportster that’s stripped at the waist, packing plenty of punch and showing off one hell of a rear end. Even for Wenley, categorising the build is difficult “The word racer was brewing in my head, I decided to make the bike’s theme into a drag/race bike, but I’ll let you guys decide what it is…” The truth is it’s all that and more, with Cafe Racer influences and old school Bobber touches that mix with the drag racing look. Nicknamed ‘Furiosa’, it’s fair to say this HD is every bit the fearsome, fiery warrior as Charlize Theron’s character in Mad Max: Fury Road. If the big tyre doesn’t catch your eye first then the brilliant paint and metal work probably does, with the perfect mix of colour and raw mechanical materials. The paint work itself is a clever combination of stark white and eye-catching colours that give the impression of fast movement even when standing still. There is a touch of pink to show off the bikes feminine qualities while the hand-made carbon fibre front fender also receives a splash of paint and gold leaf that also stylises the headlight surround. With the fibreglass seat finished in a tank matching colour scheme Wenley wasn’t exactly sure how he wanted to finish the underside. “After fibreglassing and playing around for a couple of weeks I came up with a strange way to cover up the rear section I thought about fish scales, had some alloy rectangles cut out put them together, it started looking like what I had in my head, raw and fancy.” If a lot of Harley builds fall to criticism in one area it is the lack of upgrades to their suspension, but once again Wenley delivers the goods. Having done plenty of front end GSXR conversions in the past on other bikes he translated his skills over to the Harley and with a custom top clamp and bunch of bearing changes it looks so good and performs so well you wonder why it’s not a factory option. Custom braided brake lines were added and with the Suzuki swap also comes the benefit of the big twin rotors clamped by quality Tokico calipers. Clip-on bars and shorty levers give an entirely different feel to the usually Harley front end while a quick email to the guys at Motogadget took care of the switches, speedo and M-can that work in-sync and result in an ultra clean look. Out back things get a little wild and that’s exactly what Wenley was after, a fat rear end and nothing says a big round booty like a 250 tyre on the little Harley Sportster! It’s a flawless execution with many wide tyre conversions looking out-of-place but Mean Machine has got this one spot on and it enhances the drag race look without ever looking cartoonish like so many Choppers. Swinging that big tyre and helping it handle are a set of Ikon shocks that raise the rear and give the bike a perfect line when viewed side on. Part of converting to a 250 rear meant the switch to a chain drive over the belt and as well as it works it also looks the business too. But the chain presented a problem as Wenley explains “the rear set we bought off the shelf didn’t fit so back to the drawing board I came up with a custom chain / rearset mount that also dressed the ugly part of the engine.” While over on the other side the new rearset that facilitates the gear changes looks just as good in the raw finish and with the pair rear mounted the rider gets much sportier ergonomics than you expect from a Harley. But the rearsets weren’t the only change as a result of the big tyre and chain drive conversions, with the desire to achieve a less cluttered look and show off that Cafe Raceresque negative space between the tyre and engine more changes would need to be made. For Mean Machine this was no problem at all and they repositioned a new custom oil tank at the front of the bike, complete with braided lines and high-end fittings it’s what you’d expect to see at the drag strip. The battery was also cleverly hidden and now sits on its own tray at the centre of the bike below the swingarm; Both these modifications bringing the centre of gravity even lower to the ground. A Mean Machine with the name Furiosa can’t be under powered and although the standard 883 engine is no pipsqueak Wenley knew he wanted more grunt. With a racing style machine on his mind there was a clear solution, take the 883cc engine out to Harley’s own 1200cc race engine capacity. This was all done in-house with a big bore kit featuring Wiseco forged pistons inside new big bore cylinders fitted to the standard bottom end. The result is a brute, with an engine much closer to a square bore, you get all the advantages of increased torque with more power from a freer revving engine that doesn’t suffer the friction loss of the overly undersquare 883. To add to the tough look of the new motor the team made a velocity stack on the lathe, with the welded connection pipe joining to a laser cut opening for a precision fit. Surpassing the throaty intake roar is the noise emanating from the stunning custom stainless steal exhaust that instantly adds some racer cred. Not happy with the simple exhaust springs Wenley made a latch to keep it all together and it’s these little fabrication tricks that show off just how good Mean Machine are. Finishing out the build are the “Mean” logos, gold leaf on the tank and raw metal items on the intake and custom rear. All that is left for Wenley and the boys to do is decide who gets to climb aboard Furiosa, throw a leg over the suede seat with red diamond stitching and hang on, because she rides you as much as you ride her!