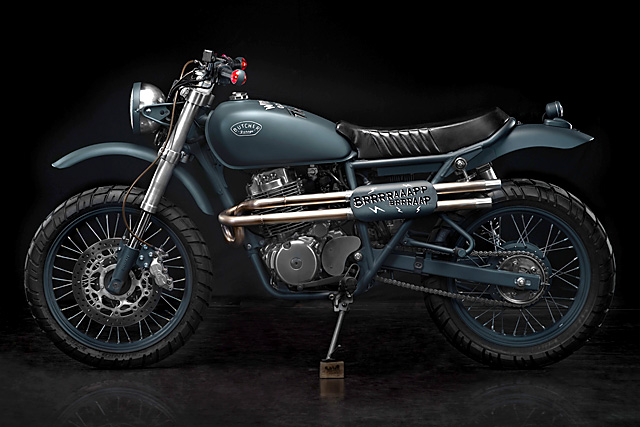 Nyen. Saint Petersburg. Petrograd. Leningrad. It’s the city with more names than Rasputin had orgies. Along with the Mad Monk, Saint Petersburg has been at the centre of Russia’s tumultuous past century of history, including being its imperial capital and the root of the Communist revolution of 1917. It’s now one of the most ‘Western’ cities in Russia (both socially and geographically) and serves as the country’s cultural epicentre. So it makes sense that if there’s anywhere in the nation’s vast expanse that would sprout a world-class bike shop, it would be here. Enter Butcher Garage, a bunch of custom Vespa builders who’ve undergone a little revolution of their own and shifted their mitts onto some Japanese metal. Here’s their latest build, a Honda simply called ‘The Scrambler”. The workshop was established in 2010, and by all reports it’s been earning itself quite the big reputation since then. In Russian, the slang term for tuning parts is ‘meat’ – hence the shop’s name. “Everyone who drives a motorcycle or scooter in the northern regions knows us for what we rode ourselves on; sure-shot service,” says Mazan Alexander, the shop’s chief chop. “We’ve been looking for years to move our home base to somewhere warmer in the south. We have never really been able to decide between Asia or Southern Europe. Obviously both are great, but our circumstances seem to change quicker than we can pack the suitcases.” Owing to the previous successes of their Vespa-based builds, the media spotlight is no stranger to the Russians. “Suddenly, our work became quite popular and we started to give lots of interviews; we had to tell many stories about how ‘Butcher Garage’ happened for magazines and blogs.” Clearly it was fun while it lasted, but talking to Mazan, you get the feeling that the team as a whole has grown up somewhat and is hungry for new horizons.

With something that sounds more than a little Warhol-esque, their studio is home to many good friends who are all involved in the life of the workshop to varying degrees, but the main ‘garage’ team consists of three people. “None of us had anything in common with our previous work, though all had decent two-wheeled experience,” say Mazan. “We all met each other in a local bar; one of us was bartending, another was DJing. Sometimes, when there was no customers, we’d spent long nights discussing all there is to know about motorcycles and scooters. Now we are completely focused on building great bikes and a great shop. It’s become our main goal and it seems to have absorbed us entirely.” While being their most complex and thorough bike build so far, it also rates a mention as their first ever project for a female customer. In what would be a dream brief for any shop, she granted the team carte blanche to do whatever they liked, with only one proviso. “She really didn’t want the bike to look too bright or feminine,” says Mazan. Job done, we’d say. While we assumed that he bike’s theme had maybe been influenced by a military look, he insists it was nothing more than the team fleshing out the direction chosen by the customer. “This CB was the third Honda of its type that we’d laid our hands on. We’d decided on a scrambler build from the beginning, but we like to build our bikes ‘freehand’ rather than to design everything in detail before we get our hands dirty. This way you get to observe and guide how the real bike looks during the construction phase. Try and do it all on paper, and we’d just get frustrated with trying to make the drawing real and not going with the flow.” The first focal point of the build was on the suspension set-up. With the front forks swapped with a set from a Ducati Monster and the rear spring sourced from a Ducati Sport Classic, the call was made to run a single shock on one side of a swingarm. “We had our doubts, but there’s zero flex and testing proved the bike was much more stable. We’ve ridden a lot of CB400s, and the ever-present ‘old sofa’ suspension feel was completely eliminated.’ Once sorted, the bike’s brakes were also updated with the Brembo and the disk you see here.

Along with the bouncy bits, the bike’s frame, front and rear fenders, and swing arm all had a turn on the grinder’s wheel and the welder’s flame. With the dirty work sorted, Mazan opted for a neat new Rental bar crowned with two Ox-eye blinkers, some new Shinko rubber and a host of smaller bespoke parts including the electrics box, rear tail light and new stainless exhaust.

“Initially, the design was planned to be more trashy and patinated, so we tried to etch the tank with iron chloride, but we couldn’t master the process in time and the results didn’t look like we wanted them to, so we chose a ‘calmer’ look with some powder coating and custom lettering from Nastya (@ms.unnamed) who’s one of our graphic designers.”

During the shooting of the video below, it was decided that the exhaust shield was a little too small to do its job properly. “Now it’s larger than you see in these photos, and is also made of aluminium. We’ve unanimously decided that the mods now make the bike look even better,” says Maz.