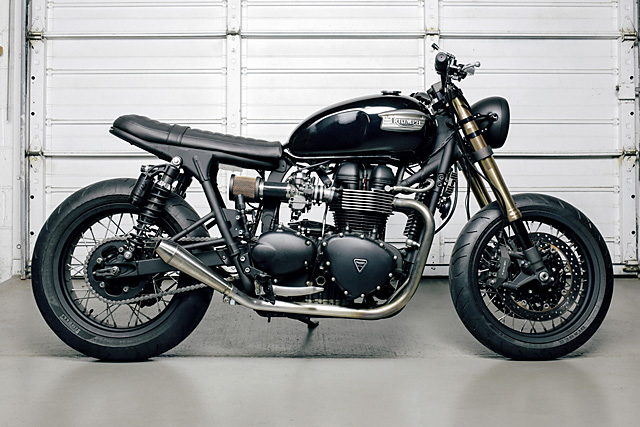 Steak and chips. That’d be my death row meal, I think. And a bottle of really good Aussie red. Yes, I have thought about it before. Now it wouldn’t just be any old piece of meat and spuds. No way. It’d be something special. One of those melt in your mouth steaks that’s so tender, it almost cuts itself. That’s the thing about good steak; it’s so simple, yet so delicious. And awesomely unpretentious, too. Which brings us to tonight’s bike. It too is a perfect slice of meaty goodness, with nothing more than the bare essentials to make it perfectly delicious. It’s a killer black-on-black Triumph Bonnie and also it’s the latest build from Cognito Moto, so why don’t you tuck in? The bike started as a plain old 2007 Triumph Bonneville black. It had been sitting in the previous owner’s garage for two years before Devin Henriques and the team at Cognito got their hands on it. “The build started with a front end swap and a wide wheel kit out back,” says Devin. “The front wheel is our hub, laced to an Excel 17″ rim. By offsetting the front and rear sprockets, we were able to lace a wider 17″ rim and mount a 180 rear tire. It completely changed the look and feel of the bike.” The bike’s new front forks are from a GSXR 1000, and are deftly mated to the Bonneville through a complete triple tree and stem setup that perfectly accounts for the tire size changes that Cognito made in-house. “As per usual, we can’t leave any bike alone and a build is never really finished,” chuckles Devin. “We decided to pull out the stock airbox to make room for one of our CNC’d intake boxes. Once we had cleared out the rear triangle, we had to do something about the plethora of wiring hiding under the stock side covers.” It was then he decided to ditch the entire wiring harness for custom wire-up, using the über-popular Motogadget m-unit. “We really wanted to keep the cockpit clean. So we mated Biltwell’s Tracker bar with our custom riser clamp with an integrated Motogadget Motoscope mini gauge, and motosign for indicator lights.” As you can see, the overall effect is one of black-on-black, minimal badassery. The LSL headlight bucket was mounted using a pair of MotoDemic brackets and was held together with small pin LED turn signals. To accent the GSXR fork swap, Devin upgraded the rear shocks with FOX Street Performance RC1 units specifically modified for this application. “To round out the rear end, we utilized our Triumph rear hoop with the inlaid LED brake light and signals. We then fabricated a new pan for a custom seat upholstered by WheelBorne. And a small under-seat LED light keeps the shock-mounted license plate well-lit.” As always, there are a few other little items that are hidden from the eye, but important none-the-less. For example, Devin milled an bespoke aluminium tray for all the bike’s electronic’s that’s nicely tucked away under the new seat. There’s also a CNC’d battery box mounted to the frame under the swing arm, that houses a new Shorai battery. “Honestly, the hardest part on this build was getting the seat right,” grimaces Devin. “The gas tank mount is deep under the cushion and it was forcing the seat to rise up at the front. It was really frustrating. But on the other hand, the seat is also one of my favourite parts of the new bike. The upright seating position and the bike’s loud pipes really brings out the hooligan in me.” We’d join Devin in his riotous activities, but we’re afraid that all that steak and wine has gone straight to our head. If it’s all the same to you, we’ll just hang back and have a snooze. Wake us with those loud pipes when you’re done, Devin.