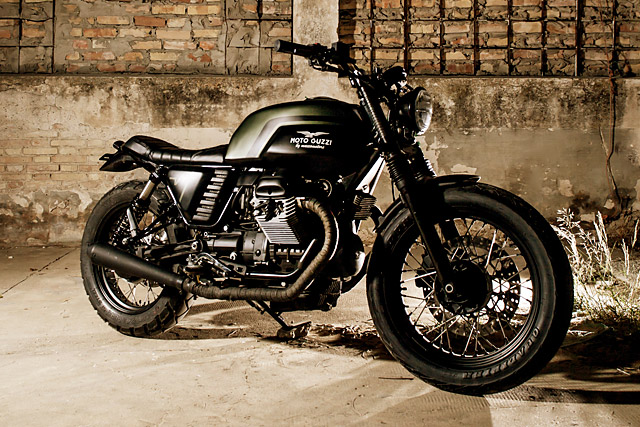 ‘Trailer Queen’. We’ve all heard the phrase before. It implies that a bike has been customised to the point where it just can’t be ridden. Hell, if you believe some of the more mainstream motorcycle writers you’d think that just about any kind of personalisation or customisation somehow renders a bike freakishly unsuitable for anything bar a once-yearly wobble around the block. But in our minds, that’s the opposite of the truth. The fact is that the manufacturers are forced to make hundreds of ‘one size fits all’ decisions on every bike they make. Be it for budget, new rider or even regulatory considerations, there’s no way a mass-produced bike can be perfect for you unless you make it perfect yourself. And we’re pretty sure that this latest build from Spain’s Maccomotors is a perfect case-in-point. This rather lovely Guzzi is the latest work of art to out of the Macco Motors Spanish R&D lab. It was a sterile white and tired 2008 Moto Guzzi V7 Classic. Strangely enough, it was these very two things were first on the owner’s list to change. Macco’s answer was a black and olive green brat-tracker they named “Mr Green.” José from Macco takes up the story. “This Guzzi had a lot of kilometres on it, because owner David and his girlfriend used to travel on it several times a year all over Europe. To him, usability was very important – the finished bike had to be beautiful and useable. So to start we built a new subframe but kept a two-up seat which was a little thinner and a bit shorter than the stock one.” They then turned their attention to the rear suspension by adding some very slick Hagon Nitro progressive shocks. At a conservative 1cm lower than the standard units and with more progressive Hagon springs up front, the overall effect is an improvement in both ride quality and visual stance. “A 12 volt socket located in the new Rizoma handlebars was requested to allow David to easily connect his GPS for long trips. While we were there, we also fitted black Biltwell Kung Fu grips and shorter clutch and brake levers, along with a Bates-style headlight and a new Koso speedometer. We finished the front off with Triumph gaiters, some adhesive black rubber tape and mini turn signals.” The boys then got their fibreglass on; factory holes in the tank, side panels and the stock fenders all needed to be covered to ensure the fresh paint would be looking it’s best when applied. Once complete, the fresh paint was applied before new Guzzi branding and a vintage V7 logo were added. “To finish, we mounted a Metzeler Tourance 140 tire on the back, a Dunlop F20 110 up front and then we gilded the lily with some black pipe wrap and a simple yet classic megaphone exhaust.”

Anybody got a V7 they aren’t using? For some reason, we’ve got a sudden urge to make one freakishly unusable for ourselves.