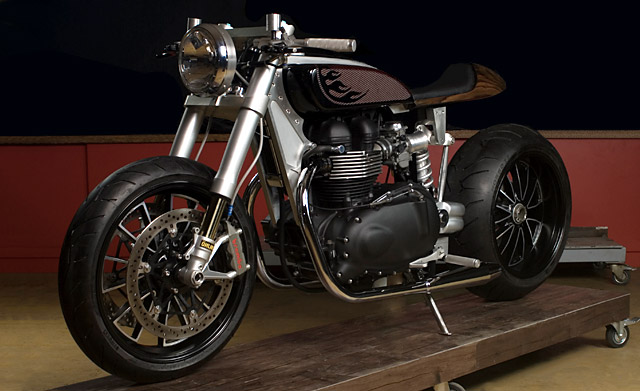 “Oh come on!” is not a quote from the builder of this custom masterpiece but my own as I gazed across the first images that appeared in my inbox and realised that like my latest build this too was done at home. But whereas I thought I was fairly clever for making a carbon fibre seat for my ride, Ram Ram has literally built this bike from scratch. We both started by searching eBay, but that is where the similarities end and I for one can only stand, applaud and tip my cap to a man who takes back yard builds to a whole new level. Hailing from Bandung, Indonesia Ram Ram Januar is the creator of White Collar Bikes, his spare time hobby that turns out some of the wildest rides in the Southern Hemisphere for himself and his friends. Searching for an engine to be the centrepiece of the build Ram Ram turned to everyone’s favourite cyber parts bin, eBay, and secured himself a 2012 Triumph Thruxton 865cc DOHC Twin. But using the factory tubular steel cradle frame was never going to satisfy Ram Ram, so he set about crafting his own from 50mm chunks of T7 aluminium. Following the theme is the aluminium 8mm subframe, rear shock supports and stunning single sided rear swingarm that utilises a Ducati 1098 eccentric hub. With such an incredible foundation there would be no corners cut from here on in and parts that can’t be made at home were sourced from such names as Ohlins and Brembo. Clamped by a set of his own handmade triple trees are a pair of Ohlins FG series USD front forks that work flawlessly with the now single Ohlins rear shock. Swinging from the bottom of the Ohlins and brings the whole show to a stop are Brembo mono blocks at the pointy end and a single Brembo in the rear. The levers too are from the Italian red B, while the clip-ons and grips are once again Ram Ram’s own design and build. Giving the Triumph heart a little extra zing are a set of, you guessed it, Ram Ram built velocity stacks and his own version of the best of British with the stunning pipes and mufflers that pay tribute to the Triumph’s of old. There’s also no shortage of detail work, the hidden throttle and clutch cables, the custom sprocket cover, the industrial looking billet headlight and the raw alloy foot pegs. Matching the sculpted aluminium look with the right wheels Ram Ram turned once again to Italy and picked up a set of Ducati Diavel hoops wrapped in Pirelli Diablo Rosso rubber. But as he tells it, Ram Ram is a man easily bored. So rather than make one tank and seat combo he wanted to be able to change them out at a moment’s notice. So the frame was modified to allow quick changes and then he fabricated, count them, three different tank covers and three seat sections. The tank can be changed between Red Carbon Kevlar, Blue Carbon Kevlar or Black Carbon depending on the look for the day. While the seat options are all beautifully crafted from timber with the latest sporting the Triumph logo and a scalpel tail design. So is it any wonder that when his friend Bhaskara walked into his garage mid build he told him this bike had to be his. And not only is Ram Ram an incredible craftsman but a hell of a guy as he agreed to finish the bike and sell it straight to his good mate. The Bhaskara Thruxton is now ripping up the streets of Bandung with Ram Ram in pursuit on one of his other custom creations. Now when work is done for the day and the exhaust notes fall quiet, he returns to his garage and I await the day when I can again stand and applaud a brother from the custom culture talking homemade bike building into a new realm.