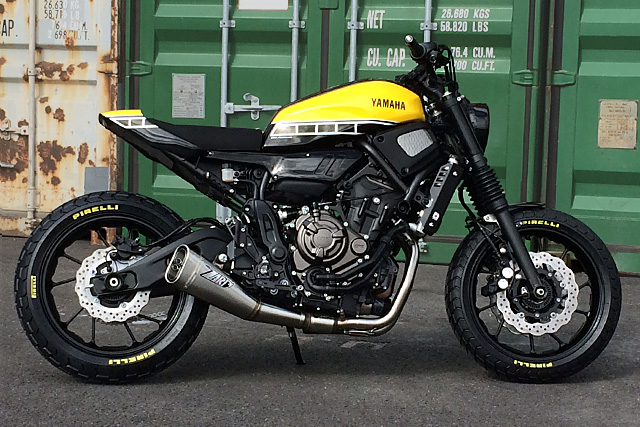 It’s amazing how much the big motorcycle manufacturers have changed in the past ten years. Up until very recently, bike customisers were little more than pariahs to the factories. All their hard engineering work, undone in the fell swoop of an errant oxy torch or angle grinder. You could almost hear the engineers in Japan and Europe weeping in pain. And as for a factory dealer that might dare to try and make a few changes to the merchandise? If they were lucky, they’d find themselves selling second-hand Dneprs in Siberia… in winter. But my, what a difference a decade makes. Suddenly it’s raining factory customs. And for Yamaha, that means throwing money behind their ‘Faster Sons’ custom shop collaboration project. And the latest star of the decidedly successful program is this here XSR700 from French shop Motomax Metz. A French shop that just happens to be a dealer, too. We spoke to the dealer’s big cheeses (it’s funny, ‘cause they’re French!) Max Lorenzini (the Manager) and Thomas Castany (the Sales guy) to see if we couldn’t tease a little more info out of them. “We were really inspired by last year’s Yamaha 60th Anniversary campaign and their limited edition black and yellow ‘Speed Block’ models. They looked amazing, and we are very much into scramblers and trackers lately, so we decided to do something about it.” So with a fresh 2015 XSR700, a head full of craziness and a professional workshop, the lads got to work. Joined by their colleague Christophe Marin (Vendor and Co-Director), they got to work. “First we pulled the bike to bits. Then we cut the entire rear frame off of the bike and then we removed the original headlight, along with most of the controls. Next, the Pirelli Phantom tires were replaced with Pirelli dirt track specials, which look great.” With the new boots fitted, the boys looked to Germany’s JVB and their ‘Super 7’ parts list to help them out. They started by modifying the bike’s  front end to take the JvB plate and headlight kit. Then, to keep things a little unexpected, they added a rear section from French aftermarket parts maker, S2-concepts. “The saddle was made by us and the paint was laid down by our in-house painter. Next, the beautiful-looking exhaust from Evo-x Racing was fixed in place.” The front forks were then lowered by about 4cm to give the whole bike a more racer-ish stance, and while they were down there they took the opportunity to add some fork gators, really blacking out the bike’s front visage. That’s French for ‘face’, don’t you know… All the controls have been disassembled and reassembled on a new MT-09 handlebar. Then the rear plate holder was attached and the rear electrical harness was moved, allowing them to switch the turn signals and the two stop lights to LED lighting. The footrests have been replaced with Yamaha Factory Gilles Tooling units. Final touches for the yellow and black wonder included replacing the front fender with a new, more svelte unit as well as adding the lateral scoops that have also come from JvB. “Lastly, we added a black radiator grill from Yamaha, along with some radiator protectors – again adding to the overall black theme. Any additional parts you see that we haven’t mentioned will have come from Yamaha.” Naturellement. What was the real challenge during the build? “Just trying to make a homogeneous motorcycle that was unique, sexy and desirable by coupling two kits separate body kits together,” says Thom. “We know it would be unique, be we just weren’t sure if out was going to be ‘good’ unique or ‘weird’ unique.” We’re not sure about you lot, but we know where our thoughts lie – and that’s squarely in the ‘good’ camp. And to finish we asked them what was their favourite part of the finished bike? “The sound! It’s so Rock ‘n’ Roll!’ says Thom.

He was also happy to tease us about their upcoming builds. Apparently there’s another XSR in the pipeline and an Indian about to hit the bike lift, too. And with what we’ve seen here, even our bated breaths have bated breaths. Watch this espace.