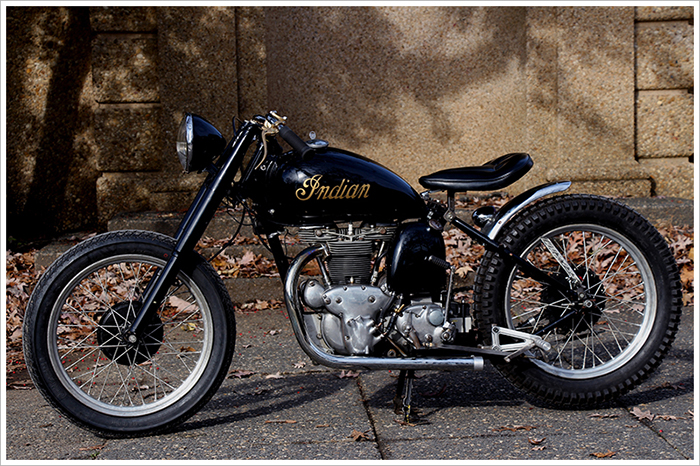 When Clayton Schaefer from Street Spirit Cycles received a phone call from a customer asking whether he would “café my Indian?” his first thought was “there’s no way, it would be a sacrilege!”. He just couldn’t imagine taking the sawzall to a piece of motorcycle history. “But as we went back and forth I learned that we weren’t just talking about any Indian”, says Clayton. “We were talking about the Indian that bankrupted the company: the slow, awkward, 213cc cousin of the beloved big twins”. You see, the Arrow 149 was one of the last bikes to roll out of the original Indian factory floor before they went out of business. It seems the development costs and teething problems of this little motorcycle may have actually been the final nail in the coffin. So with that in mind Clayton took on the job – but decided to leave the sawzall alone. After Clayton took a good look at the bike he determined that it had been modified and “restored” at least once already, and that it’s value as a collector’s piece was probably pretty low as a result. “To be on the safe side, we agreed on a build that would preserve all the components that came on the bike, leaving the frame intact and unmodified. This created some interesting challenges, because normally I wouldn’t think twice about welding a bracket here or cutting off an offending tab there in the course of setting up a bike.” “By far the most complicated piece was the mounting bracket for the rearsets, which had to bolt to the only available hole in the frame in the tiny space in front of the rear tire below the battery box, clearing the chain, centre stand, exhaust, and transmission case, and leaving enough room for proper operation of the shifter and brakes. The way the bracket is shaped, rider weight goes down onto the side rails of the frame rather than depending on the single fastener through the tube.” “The actual rearsets consist of a mix of handmade parts and pieces scavenged from other builds, like the shifter linkage ball joints from a GS450 and the passenger peg mounts from a Ninja 250.

On the hand controls, the original Indian had a pretty funky setup – big high cruiser bars that didn’t match the diameter of any available on the market today. We ended up going to more common 7/8″ standard, but to preserve the vintage look and feel of the bike, we used handmade solid brass risers and levers. The ‘mustache handlebar’ creates a nice low riding position and makes the bike look more like plausible period mod.” “The carburetor is a Dell’Orto remote float unit with a velocity stack and gasses exit through an open header. It has a points and coil setup that replaced notoriously unreliable ignition on the original bikes, and it’s been converted to a solid state voltage regulator and a sealed lead acid battery. Headlight is original with new switchgear, and the tail light is from the Harley aftermarket.” “Side covers have been resealed, which improved the oil leak situation considerably, but I’m pretty sure these bikes leaked oil when they were brand new so there’s only so much you can do.

Other than that, we just cleaned her up and removed as much unnecessary junk as possible to get the weight down and improve handling. I know at least one person who commutes daily on a ’40s Indian, but it’s probably best to save it for those sunny afternoons when you have nowhere in particular to be.”