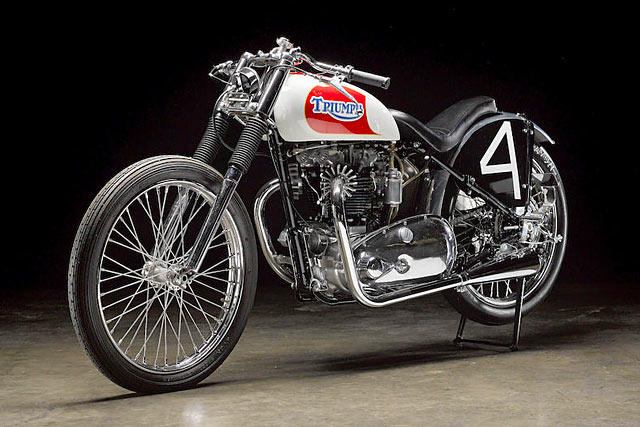 When is a Triumph Bonneville not actually a Bonneville? When it’s a Thunderbird T6 that raced and wowed the Bonneville salt flats in the sport’s golden era, that’s when. A full 6 years before the model name was dreamt up, a 13-year-old Californian named Bobby Sirkegian, under the watchful eye of Rollie ‘No Pants’ Free, took this particularly sweet-looking 649cc bad boy all the way to 122mph. True story. In fact, the bike still has the brass SCTA timing tag attached. It may not be a Bonneville, but it sure as hell owns the name. After more than a decade of battle-imposed austerity, Triumph followed up their uber popular Speed Twin 500 of the pre-war days by leading the field once again with a new 650cc parallel twin model. Announced in September 1949, the 650 T6 Thunderbird was Triumph’s guns-a-blazing response to the demands for more power from both American and British racers. As Bonhams (who is soon auctioning the bike) notes, “A spectacular launch stunt saw three Thunderbirds lap the banked Montlhéry circuit in France at over 90mph for 500 miles, after which they each achieved a flying lap of 100mph-plus and were ridden back to the Meriden factory, a quite outstanding achievement”. Enter the equally outstanding Robinson ‘Bobby’ Sirkegian. Clearly, motorcycle racing was Bobby’s destiny. When he was six he was riding in Pee-Wee races and by the time he was 13, he had become the first AMA/NHRA Grand National Champion. At this ripe old age, Bobby was already quite used to doing the ton. Riding Triumph drag bikes sponsored by his father’s Los Angeles bike dealership, he was seriously competitive on the many quarter-mile drag strips popping up in Southern California in the early 1950s. Health and safety eat your heart out.

In Pomona, California in 1953, Sirkegian took wins in both the 500 and 650cc classes in what would become the first ever race of the NHRA Nationals. While most teenage boys his age were hoping for nothing more than a peck on the cheek from their class hottie, here’s Bobby, a double champ at age 13. And he did it all again the very next year.

“Bonneville officials knew of young Bobby’s prowess on a drag bike,” says Bonhams. “And so he was given special permission to run at Speed Week in 1953. He lined up for passes in the 650cc class on a bike built very much along the same lines as his Dad’s drag racers. Cylinders were bored 0.040-over, a big-bearing crankshaft was fitted, as were special-grind Iskenderian camshafts and lifters, and lightened, narrowed timing gears”. “A flow-benched cylinder head benefitted from enlarged intake and exhaust valves, S&W valve springs and a special manifold setup for the twin Amal carbs with attached GP-type float bowls. A BTH racing magneto provided spark. A 3-gallon fuel tank from Triumph’s 3T model carried enough gas for the salt speed runs. Because stopping was not a great concern but friction was, a brake-less spool hub was fitted up front.” [superquote]“The schoolboy was given a special award for being the youngest rider ever on the Bonneville Salt Flats”.[/superquote]

The legendary Rollie Free, famous for his record 150.313-mph ‘bathing suit’ run aboard the world’s fastest Vincent in 1948, gave the Sirkegians a pair of his Bonneville-ready 3×20-inch Avon ‘File Tread’ rear tires. And while Bobby’s 122mph pass on the 650 Triumph didn’t set any class records, the schoolboy was given a special award for being the youngest rider ever on the Bonneville Salt Flats. Unusually, Sirkegian never returned to Bonneville as a competitor. But his passion for drag racing saw him win some 200 trophies and set track records right across the whole US of A. He’s kept the Bonneville T6 650 pretty much ‘as run’ on the Salt Flats. It was treated to a full restoration by Sirkegian himself six or seven years ago, and it still wears one of the ultra-rare 20-inch Avon rear land-speed tires. Inspired and feeling particularly flush at the moment? Then you can put in a bid to own this piece of hot Triumph history by getting on down to the Bonham’s Las Vegas Motorcycle Auction on the 25th of January. There’s an army of cool bikes up for grabs and who knows, maybe they’ll give you a bulk discount?