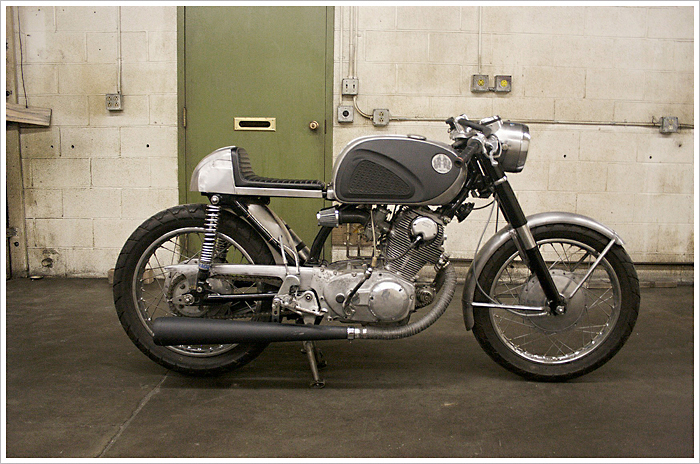 We love custom bike builders. Let’s face it, without their creations we wouldn’t have much to feature on this site. We love the Shinya’s, the LaRossa’s, the Benjie’s, the Dime City Cycles, the Heiwa’s, the Wrenchmonkees, the Radical Ducati’s, the DP Customs, the Classified Moto’s… you get the idea. But we also really love the young bike builders. The guys who are wet behind the ears. They haven’t built many bikes but they are passionate as hell. They aren’t jaded by the industry. They don’t know what’s been done or what hasn’t been done. They don’t even care what shouldn’t be done. They haven’t read a million negative comments on motorcycle blogs. They just got bitten by the bike bug and they simply want to build sweet bikes. Their attitude is what motorcycling is all about. The freedom to do what you like with whatever you have. Guys like Hill Hudson. Hill is an illustrator from Portland Oregon who came across the very healthy Portland motorcycle scene a few years ago and liked what he saw. He managed to purchase an old CB77 that had been out of action for some time and took on the challenge to rebuild it. This is Hill’s story… “To be honest, I’m not a very experienced builder. I’ve only done two bikes from the ground up and about four engine rebuilds. My interest in motorcycles only started about three years ago, a bit before my 21st birthday. I bought this bike after it had been supposedly sitting for thirty years and knew from the start that it was going be a keeper. The Honda CB77’s were an extremely popular bike throughout the 1960s and after a lot of research I found that most people road them into the ground or if they still had one, usually restored them to factory specs as much as possible. I knew that I wanted something different, and being that the bike is a small 305cc I decided to go with the solo café style. The first thing I jumped into was rebuilding the engine. This engine is really fun to work with in my opinion, because their is a lot of room for easy customization, such as the gear ratio adjustment, commonly referred to in the CB77 community as “crossing the gears”. This involves taking the two middle gears on both transmission cams and swapping their positions in an X formation, which in turn actually brings the ratio much closer together, enabling fast up shifting and faster acceleration. After the engine was back together with the newly adjusted trans and a fresh top end job I went to the frame, removing everything that wasn’t absolutely necessary and giving it a nice new coat of paint. I love the look of raw steel on motorcycles and even the occasional controlled rusty look, so I kept the tank, fenders, headlight bucket and seat all raw. “I ended up drilling what

The seat was actually the most challenging part of this bike, I probably made ten different mock ups before finally getting the idea to grab the extra CB77 tank I had laying around, cut it up and us it for the seat hump. Getting the seat pan upholstered by New Church Moto in Portland Oregon was also a little icing on the cake. The taillight also took some thinking. I ended up drilling what felt like a million tiny holes on either side of the seam on the end of the seat, and made a custom LED circuit board that mounts right behind the holes, maintaining a discreet and bright brake light. I had a little fun with the tank badges too, I designed an insignia that included my initials and had the logo laser engraved on to stainless steel, that was kind of where I stopped and realized I could easily go too far with details a bit too easily. I’m excited to keep touching the bike up as time goes on but I know I’ll never hear the end of my girlfriends ranting about how selfish it was to put a solo seat on it!”

Hill, your girlfriend might hate the seat but we think it’s the standout feature on the bike. Chopping up the extra CB77 tank for the seat hump was a stroke of genius and the tail light is simply stunning.