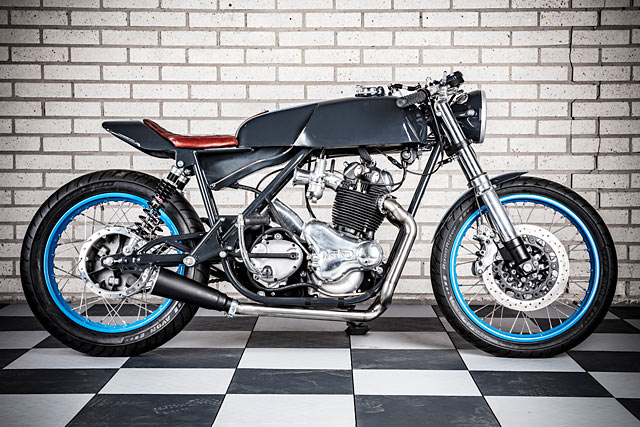 For a young guy, Sweden’s Adam Nestor is an old hand at this whole Pipeburn feature bike thing. His 2010 ‘Madame Guzzi’ board tracker was probably the first custom bike we featured that really opened our eyes to just what was possible in this new wave of custom culture. Brilliantly innovative on many different levels, that one bike has meant that we still hold the guy in very high regard all these years later. And as if to prove to us that he clearly hasn’t lost any of his prowess, he’s just dropped this remarkable new build in our laps. Here’s his Norton Commando cafe he built for Swedish toolmaker Verktygsboden he calls ‘Project VNR’. “I live in Bollebygd, Sweden, which is on the West Coast,” says Adam in opening. “Since I was 19, I have built a lot of bikes, café racers, scramblers, choppers, board trackers and even some cars. About a year ago, I started working for a Swedish Tool company called ‘Verktygsboden’. And very soon afterwards, I started this project; we call it ‘Project Verktygsboden Norton Racer’, or ‘VNR’ for short.” Adam’s goal was simple, he wanted to build a classic looking cafe racer with properly upgraded suspension and brakes. “I picked a Norton because I personally feel that no other brand fits better within the cafe racer category. But the real special part of this build was that I decided to do it in-store in front of our customers. So every Friday between 2 and 5pm, I worked on the project with our own tools for the crowd.” Custom bike building as a spectator sport? Count us in. “It’s a 1972 Commando,” Adam says. “When we decided that we would use a Commando for the project, I actually already knew where I could find the perfect bike. A guy here in Sweden called Tomas runs a shop called ‘P&B’. He had this Norton in his barn. He is known as the country’s expert on old Triumph engines. I called him, and luckily the Norton was for sale.”

[superquote]“When we decided that we would use a Commando for the project, I actually already knew where I could find the perfect bike.”[/superquote]

After Adam had started the project, a magazine in Sweden showed some interest in following it’s progress. “There ‘interest’ turned out to be 11 seperate articles with photos and text published throughout the build,” Adam smiles. The magazine, called ‘Nostalgia’ only shows classic cars and motorbikes, so Adam’s sneaking suspicion that he should build a classic-looking cafe racer was more than confirmed. It was then that the hard work really started.

“I began by dismantling the whole bike in to individual components. Then I blasted the frame, swing arm and engine mounts until they looked like new. I also dissembled the bike’s engine and gearbox. After that, I reassembled a kind of visual mock-up using the frame, engine and gearbox minus the gears. With a clearer idea of what I was working with, it was time to start the racer’s construction work.” Adam kicked it off by building a new oil tank, located neatly beneath the seat. “Then I continued with the construction by fabbing up the swingarm, fuel tank, seat and a lot of other little bits and brackets.” Adam says that the exhaust was probably the most enjoyable part to build, mainly because he got to test his TIG pulse welding skills. “Our machine let you pulse very slowly and gives you very high amps over a very short time. This in turn gives you a very small weld with very little heat dispersion.” And you can see the results for yourself. “I chose to build the exhaust in stainless steel, mainly because it develops a very nice colour once you start to use the bike.” “Then, once every part was made and I was happy with it all, paint was applied and the final assembly of the cafe racer was ready to begin. But instead of doing this in the store, I did this last stage of the build at a fair called the ‘Custom Motor Show’ In Jönköping. Once I had it all together and running, I finally had a chance to look it over. The best parts, in my opinion, are the bike’s front end and the seat, but I’m very, very happy with the overall bike, too.” And we’re here to tell you that you’re not the only one.