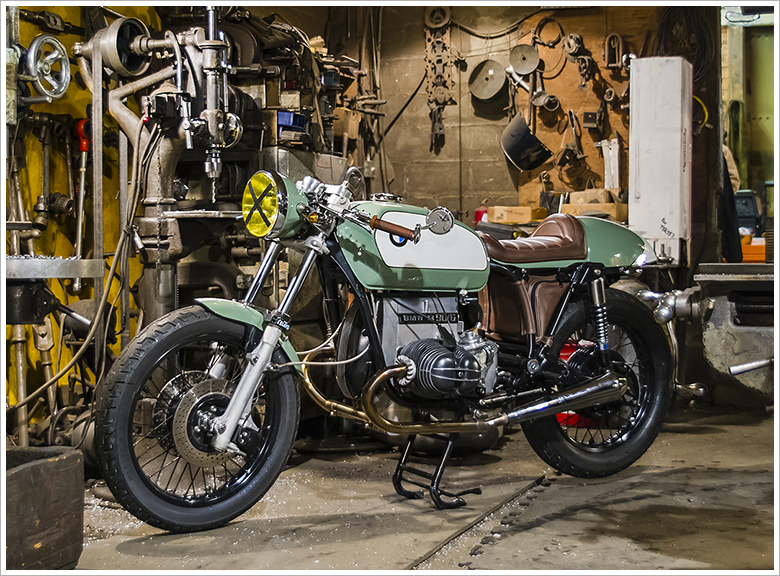 Alaska is referred to as America’s last frontier and in summer, thousands of motorcyclists flock there to experience the spectacular scenery and the endless miles of winding roads. Although, most of the bikes heading up there are touring, cruising and enduro bikes. It now looks like the café racer scene is starting to take off – one bike at a time. Alaskan local Erik Christensen and his friends have started the Northern Café Racers. “Our café posse is four deep” says Erik. “We are just a few guys with everyday lives, building café bikes in our garages in anticipation of the incredible Alaskan riding season.” This stunning BMW R90/6 isn’t just the first bike we have featured from Alaska, but it might just be the first café racer built in Alaska. Erik has always had an affinity for BMW motorcycles and opposed cylinders – probably rooted in his previous aviation career. Finding a candidate for restoration in Alaska (AK) was going to be his first challange. “Bikes in Alaska have a tendency of being used more than the average lower 48 bike” he says. “I started calling every motorcycle person I knew enquiring about BMW airheads and who might have one for sale. Ironically, it was a Craigslist alert on my phone that led to the purchase of the R90.”

Erik showed up to test the bike and was met by gentleman with a peculiarly German first and last name. “We chatted and I tried to haggle with him, but it was a halfhearted effort.” he says. “I know I’ll pay asking price for the damn bike because I’ve already envisioned removing the boat anchor fairing, luggage bags and tractor seat. After we shake, the sellers demeanor changes and he invites me to look in the garages. Turns out his 82 year old father was the owner of the local BMW motorcycle dealership years prior. Naturally, I burnt my kitchen pass at home because I disappeared for the next two hours. Connex containers full of BMW bikes and parts littered the property while the real history was in the garage. Walls of BMW tools, posters, a sidecar rig and several complete bikes. I knew I was in the right place when I pulled open a drawer and it was full of old san serif BMW roundels. I almost came home with an R27 also but I knew the motorcycle clause in my prenup would never hold up.” The old German family and Erik became friends during the purchase of the bike. “I felt I had purchased something special and this, in turn, led to the personal obligation to make the bike something special. The old German patriarch never approved of what I did to “perfectly good German engineering. I joked with him that, “I’d trade a little of that engineering for a few style points.” He didn’t even crack a smile. Despite our different perspectives on the same motorcycle, he is always eager to offer advice about bikes and life. I received a surrogate grandfather with my motorcycle.” Erik purchased the R90 in April and intended to ride the bike all summer before starting my cafe project. “Every time I rode the bike I grew more unsatisfied because it was not the bike in my mind. 17 garage beers with friends later and the bike was in ziplock bags.”

“The theme of this build was New Vintage. I wanted a super clean, unique bike that would turn heads and sound refined.  The pastel green and cream white originate from my love of everything old from the 60’s. Being 33 myself, sometimes I feel I was born in the wrong era. The brown striping was hand painted by master sign painter Perry Cowles at Perry’s Rod & Custom. He was the inspiration behind the axle-mounted license plate and the integrated LED tail light.” “All frame and wheel parts are either powder coated or bead blasted while every bearing and gasket was replaced along the way. While I had the bike fillet open I upgraded the alternator, diode board and went with electronic ignition. The dual disk conversion was already complete so I simply rebuilt the MC and replaced the rear shoes while using stainless hardware throughout. The striped cylinder heads were the result of another beer-fueled garage meeting. Just as women wear horizontal stripes to make them look taller, I wanted the cylinder heads to appear even wider by employing this same visual trickery.” “The cockpit has the highest concentration of modifications. I used Japanese micro-switches because I am horrified of too much chunky plastic. I spent time in Japan so thankfully securing these switches was a little less difficult. The top plate started as one of Boxer Metals high quality plates. I wanted the data and appearance of an Acewell but I didn’t want gauges protruding like a teenagers pimple. After a few beers with friends at the machine shop, we had the top plate modified to host the Acewell flush. It’s amazing what booze and pizza gets you in a small town.” With Alaskan winter now back in full swing, Erik has this stunnng R90 in his garage receiving a few winter upgrades. He has also started on another BMW project, which he tells us will be another great blend of ‘New Vintage’ – sounds like the number of café racers in Alaska may double by the time summer comes around.

Like Northern Cafe Racers on Facebook for more R90 build photos and progress pics of Erik’s next bike.