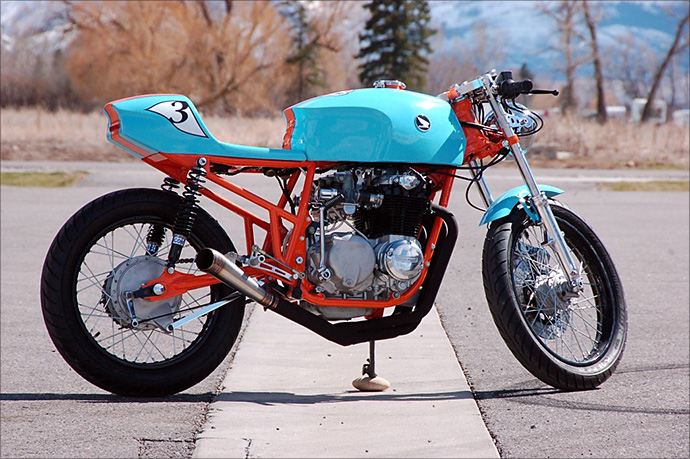 Although the carpark was completely empty, Chris still managed to park on the only rock for miles…

Want to freak out a graphic designer? Make him pray to a higher power and start rocking back and forth on his fancy bent-wood chair. Then give him a job where he can only use two colours – safety orange and turquoise, and then watch him squirm. All the rules of colour theory say “no, this absolutely cannot work.” And yet behold the beauty that is the Gulf Oil livery. Is that angels I hear? Beautiful retro motor racing angels playing heavenly engine music through trumpets that look remarkably like velocity stacks? Chris Trotter from Bozeman, Montana heard that music too. And that music said unto him “build the world’s sweetest Honda cafe racer and paint it like the world’s coolest race car, then send it over to those incredibly great guys at Pipeburn so that they may show it to the world.” And beholdeth, he did. And it was good.

Chris thus spaketh. “This bike started life as a stock 1975 Honda CB550K. I never really had a definite plan as to where I wanted to end up with this build, more of a general goal. I will say that the folks over on Do The Ton played a large role in shaping the overall look.” “I’ve always had a thing for the Gulf racing colors, especially the old GT-40s, so that’s how I narrowed down the paint scheme. The Gulf logo and number “3” were airbrushed on by a friend and fellow DTT member.  Some fairly extensive modification took place, including reworking the frame, building a one-off tank and seat from a mix of Kevlar and fiberglass, and a whole slew of parts replacement/refurbishment. I learned a good many things while building this motorcycle, and while it was a fairly massive commitment of time and effort, I’m pretty pleased with the outcome.  I won’t call it finished yet though, as there’s still a few things on the back burner, namely a 590cc engine build. All in good time though.” And it’s been a good time since we’ve seen custom tank and seat work that good. It’s damn original too, come to think of it. And that brake light treatment? Über impressive stuff. Check out the full build story on Do The Ton here. Tell the angels I sent you.