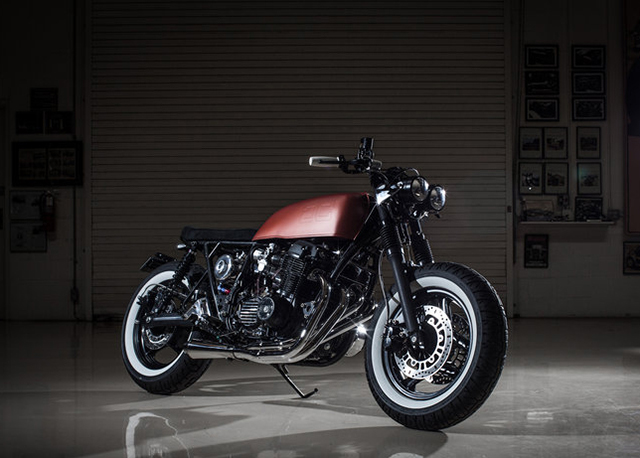 It’s not every day you ride past Jay Leno and your freshly built bike catches his eye. So much so that he then tracks you down to appear in an episode of Jay Leno’s Garage. Well, that’s what happened to Adam Gaspic from Gasser Customs. It also helped that Gasser Customs is located in North Hollywood, just down the road from Jay’s garage – so it wasn’t very hard to find him. The concept of this project started when Adam decided he wanted to build something in the spirit of the Hot Rods and Gassers of the 1950s and 60s but with some modern technology. So in between clients builds, Adam has built this mean looking Honda frankenstein named ‘Titan’. To keep with the Hot Rod theme, Adam chose white wall tires. “We’ve never built a bike with white wall tires and felt that that was an aspect that needed to be there.” He says. “This bike is as custom as it gets, starting with heavy frame mods for added strength and functionality. The engine has been bored up to an 836cc and has various other Go Fast mods giving Titan the ability to don the ton and then some!” Adam has created loads of one-off fabricated components for this bike including a GC billet aluminum top triple tree, custom oil tank, twin carb set-up and custom made shocks from Works Performance. A custom brat style seat was made, as well as a custom battery box and electronics re-located under the new 3″ extended aluminum swing arm. Theres obviously been a lot of work put into this build and it looks like this CB750 is receiving the attention it deserves. Not only was it featured on Jay’s Garage but it also recently picked up 1st place at the LA Motorcycle Show in the cafe racer/bar hopper class.