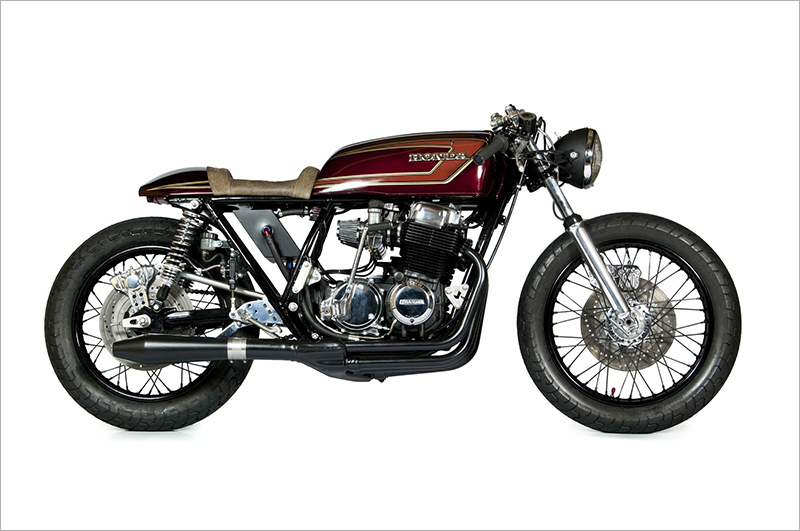 “We all know the thrill of the hunt, scouring around for neglected machines in backyards and toolsheds. Peeking under windswept tarps, and the skip of a heartbeat when you see the outline of the infamous CB750 Supersport fuel tank in some dimly lit shed”. Dustin Kott describes it in such illuminated terms, and he should know because he has done it. Many of us have stolen glances into an open shed/garage door, hoping to find some forgotten beauty, but it’s only a lucky few who actually stumble across anything of note. Dustin Kott is one of the few, and this is his latest build: the 76 Ruby Red Supersport. A perplexed original owner left in his wake, Dustin lost no time in getting the “boat anchor” bike back to the Kott Motorcycles workshop. Ruby Red’s design concept was to emulate what a bike manufacturer would have done 40 years ago – if Dustin had been in charge. The original paint was to be kept, and stock look maintained. If anything, the bike would lose components, not gain them. To round this concept out, a high polish and blue zinc plating give the bike a ‘new old stock’ finish. Much thought and work has gone into the aesthetic of the bike during the build. The ducktail has been formed so keep the lines of the fuel tank flowing to the rear of the bike, where it envelopes the taillight assembly. A steel wire framed seat sits amidships, trimmed in leather hide bearing the brand of the cattle that donated it. An electrical system of a Spartan nature is fitted to the bike, Kott Motorcycles ditching any superfluous systems along the way. The bare essentials of hi/lo beam, ignition, charging and running/tail lights circuits are all that remain. A lithium iron battery is mounted under the seat, along with solid state replacements for the regulator and rectifier units. One part of the bike Dustin was not impressed with was the stock rear brake setup. Described by the builder as “very cumbersome and unattractive”, the stock assembly has been swapped out for an FZR mastercylinder and reservoir assembly. To help in the actuation of the uprated cylinder, a pair of handcrafted rearsets have been fitted, ergonomically designed to help with rider positioning. It’s the Kott special touches that make the design concept come to life. An oil tank, manufactured inhouse at the Kott workshop, is used to “accentuate the existing frame lines and to essentially blend almost unnoticeably into the overall design”. The bikes rims now feature black oxide spokes, this idea has been utilised because the black oxide doesn’t change tolerances like powdercoat does, yet has more endurance than paint. From a “boat anchor sitting in a dimly lit shed”, Kott Motorcycles has brought this Supersport back to life, while staying as close to the original design concept as is possible. In doing so, Dustin has produced a bike which will have us looking under windswept tarps and in open shed doors, because you might never know your luck.

If you haven’t checked out Dustin’s latest vid, check it out here…