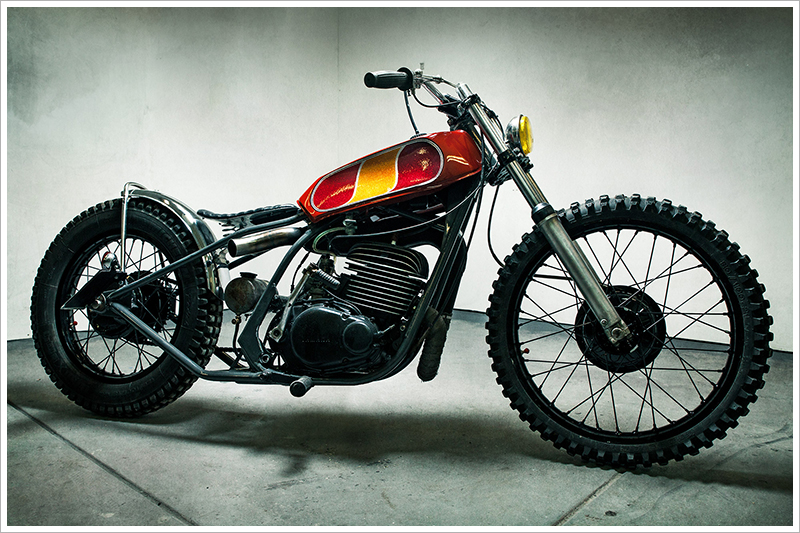 “I have an idea, let’s make it a two stroke bobber’. And that’s how the build started. From a rusted lawn ornament, the 1976 Yamaha DT400 was changed into the impressive piece of machinery you see before you today. Built over the course of three months, using original parts from the bike and anything else that fell to hand in the workshop, it was a failed attempt to enter the Rusty Kustoms Biker Build Off. Mind you, we use the term ‘failure’ in the loosest sense of the word. Built by Tom Armstrong, Matthew Blythman and Steven Blythman; a spray painter, industrial designer and civil engineer respectively. This bike is proof that you don’t need alot of money or time to build a unique custom motorcycle – a six pack of beer helps though. After seeing the MX bike languishing in a friend’s front yard, the trio decided it would make a good base for a project bike. With a leg sticking out of bed, covered in years of rust and bird droppings, the DT was a poor sight. Purchased for a six pack, dumped unceremoniously at the back of the shed, it took a quiet night and some amber inspiration to get the project underway, but once it did, magic happened. It was at this point that the two stroke bobber concept was born, an angle grinder used as a means to this end. First things to be surgically removed were the seat and swingarm. A couple of design ideas were decided to be adhered to, like wide grip handle bars, retaining the knobby tires and giving the tank artwork a ‘DT’ feel’.

Stripping the bike back to bare bones, the frame was mounted on a homemade jig to keep everything inline, and the fabrication of the hardtail begun. Much thought was put into the stance of the bike, with a real dirt tracker style aimed for. The final result was an overall length increase of four inches, and the front end dropped by three inches. A new seat was handrolled from aluminium sheet, with Steve producing the cushion on his mum’s sewing machine, having no prior experience in sewing. The headlight is half of a set Tom bought for his Ford Falcon in Vietnam, but after smashing one decided to put it away for later use. Lighting at the ass end is thanks to a 60’s dragster, and mounted on the TZ rear guard is the Ebay copy of an old Japanese racing plate. The shining light of this build has got to be the fuel tank. Utilising the average looking factory tank, the sides were scalloped out, and the section around the filler dished. Once this was done, Tom ‘flexed his bog skills and then applied the paint with some heavy flaked graphics to resemble the bike’s original tank design’. To round it out nicely the trio used close mate Matt Bailey to apply some appropriate text around the filler. Poking out behind the tank is the exhaust system, the original header matched to some offcut mandrel pipe. Mounted in the frame is the oil tank, donated by an old Victa lawnmower.

Once the frame was completed, the hunt for an engine was on. Sourcing a powerplant from a ’75 DT400, it was mounted in the freshly modified frame. All was for nothing though, as the engine just wouldn’t run. With fuel, spark and air getting to the engine, the boys were stumped. However, a prior thought that such an event might occur prompted the purchase of a backup bike. The replacement Suzuki TF125 was built in the wee hours of the final night before the comp, took first first place in the motocross comp, and almost succeeded in taking the rider’s foot off halfway through the victory lap. Once the dust had cleared from the Rusty Kustoms Biker Build Off, the new target was decided to attend the Chopped Rod and Custom with a running machine. The starting issue was traced to a faulty CDI unit, so the bike was fitted with a points ignition system. After being wired up and the points set, the bike started first kick.

From a non runner bought for a 6 pack of beer, the trio have rebirthed this 70s Japanese enduro bike and turned it into one of the most original two-stroke bobber dirt trackers we’ve seen.