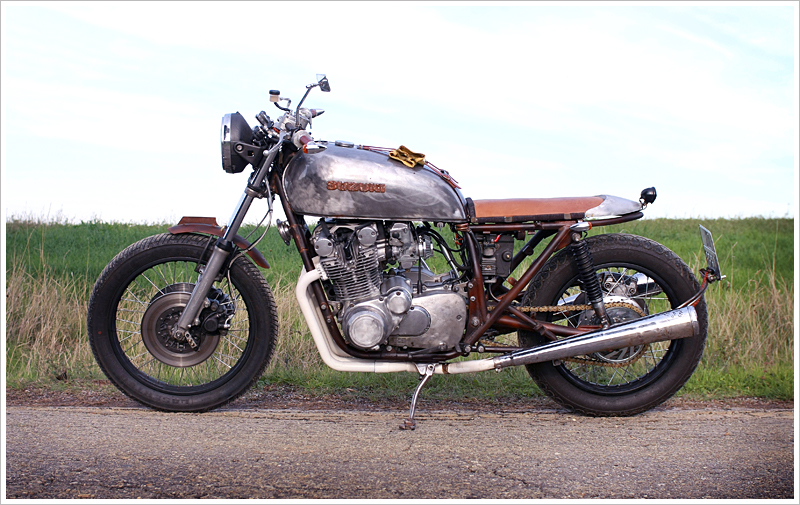 Owning a motorcycle near the beach in Sydney only has one drawback. The salt from the nearby sea ends up travelling around the streets searching for anything made of metal to slowly destroy – and it doesn’t discriminate. If you don’t wash your bike regularly, this salty air quickly corrodes the parts on your bike that aren’t made of plastic or aluminium. To most people, the prospect of having rust on their shiny pride and joy is probably the worst thing imaginable. Not to Lorenzo Rapparini from Bologna Italy. He loves rust. He loves the color and the organic nature of it – so much so that he decided to use it as a feature on his GS750, appropriately named ‘Rusty Bitch’. Over to Lorenzo to explain this Rusty Bitch build… “I’ve always been passionate about mechanics and motorcycling. I‘m unable to hold my hands. Three quarters of the things I make are totally useless, but I love them and I think that ultimately it’s all worth the effort. When you have a child, however, you have little time left and so my adventure began in the mode “I’m more in the garage than in the woods with my bike.” Yes, because I am one that ‘with your bike you should be able to go anywhere!’. I’ve ridden enduro-cross bikes and nothing else in my life, I love mud. To complicate my life, though, I decided to explore the world of cafe racers.” “I found this 1977 GS 750, first model with the double disc brake, for the modest sum of 800 Euro by a crazy Dutch, one of those who run on wet country roads in winter. In fact the bike was really in bad conditions. During the last long winter, the one with more than a meter of snow, I began to think of a theme to give to the bike. Due to its poor condition, I gave it the name of Rusty Bitch.” “Here, purchased items are very little: cables, spark plugs, gaskets and little else. I personally handmade the rest, or it has been handmade by friends: stripping, painting, construction of parts, welds. I spent many hours on it, as the ideas came along the way: I have not drawn or planned anything in advance. I started working, and what it was… was.” “The making of a tail I liked was very difficult: I have done three of them. The painting was another issue: finding a paint that simulates the rust, in fact, has been neither easy nor cheap, but I made it. And then the vintage effect was handmade piece by piece, thanks to the advice of my friend Matthew “Phantom”, I think it’s a blast – isn’t it? “The engine remained the original one with new spare parts only: gaskets, filters, oil and polishing. Here I must thank my friend “John” lifelong repairer and the great “Pièr”, who found for me the rare Suzuki Genuine Spare Parts; my friend Rino who found for me the bearings and explained how to use the lathe, and “Giotreb” who gave me the scraps of metal of his workshop, because I am a poor guy and that’s what I got to do.” “The leather parts jumped out from evenings spent in the cellar of a friend of mine’s sandwich bar: my best friend “Bear” has the hobby of making leather bags and wallets, and they are very cool. I cannot list all the people who worked-helped-searched-spent their time on Rusty, but I can say that this bike is not just a bike: in a difficult moment of my life, it gave me the way of meeting new people and to appreciate strengths and weaknesses of those who already knew. In short, so many hands touched my Bitch, but after all, it’s a bitch, my bitch.“

Special thanks to Lorenzo for shooting these photographs especially for Pipeburn. Grazie tanto!