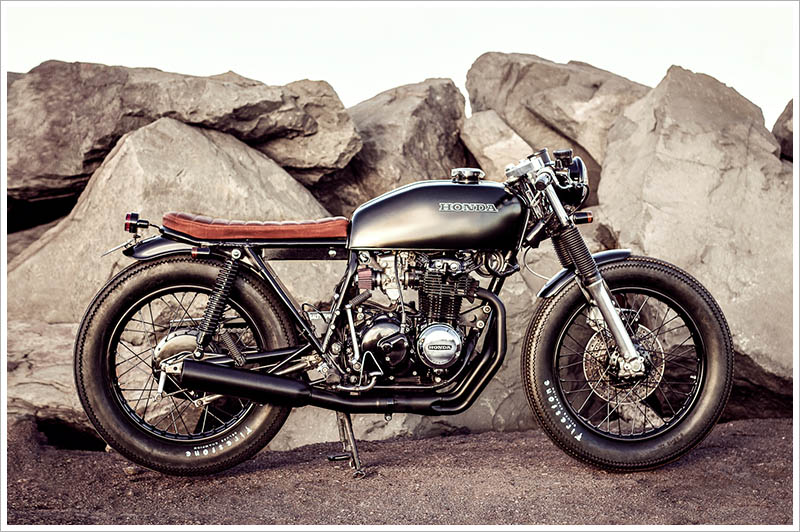 One of the newest custom shops to grace the east coast of Australia is Salty Speed Co. They are a small garage based in Wollongong (or ‘The Gong’ as the locals affectionately call it) and is around an hour south of Sydney. This is only their second build under the Salty Speed Co. name but they have already garnered lots of interest for their work. The owner of this CB400F, Brent, was originally looking to purchase their first build, a CB250 Brat Tracker that was up for sale at the time. “Unfortunately he was beaten to it by an eager young miner from Far Northern Queensland where the CB250 now resides, tearing up the red dirt roads of Mt Isa” says Matt from Salty. This time, instead of heading back to eBay to hunt for another finished custom, Brent decided to commission Salty to build him a bike to his specifications. “After a few weeks of hunting for a suitable donor bike Brent dropped of a nice looking 1978 Honda CB400F to our workshop.” says Matt. “The bike was a neat stock example that had undergone a few cosmetic updates in its time, but needed a bit of fine-tuning, especially to achieve something that fit more into our style here at Salty.” “First up was to get the right stance by fitting some fat Firestone Deluxe Champion’s, 4.00 on the front and 4.50 on the rear. A rear hoop and custom battery box were fabricated, also relocating the ignition and starter button under the seat. The frame was also cleaned up removing any redundant brackets and tabs. Original fenders have been shortened, with the front being mounted on custom alloy brackets to suit the larger rolling diameter.” “The cockpit has been significantly cleaned up with a mini speedo, mini switches, billet clip-ons, billet upper triple tree and Posh grips. The billet triple tree also assisted with the stance by dropping the front end 1 inch.

The seat is a custom unit that consists of a sheet metal pan and neoprene rubber, trimmed in light brown leather, which to break up the black on black theme.” “The engine is internally stock, however has been re-jetted and tuned to suit the K&N pod filters and Mac 4-into-1 black ceramic coated exhaust system.

The tank, fenders and wheels have been sprayed in satin black by Dutchy’s Motorcycle Spray Art, and the engine was given a coat of high temp gloss black with brush finished covers.” This clean and lean CB400F will be Brent’s daily commuter and is definitely a big upgrade from his previous ride – a Piaggio scooter. We’ve look forward to seeing what these Salty Speed dudes build for their third bike.