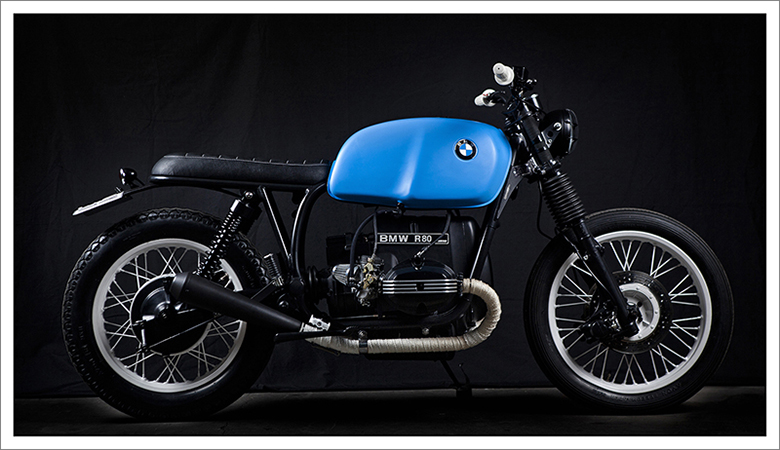 I’m sure many of us know the situation. A complete bike in pieces, a vision of the end product in our head, and trying to work out how wrong you will be about the budget required for the build. Tarmac Custom Motorcycles encountered the first two of these ideas, and the latter ended up being no issue, as whatever they spent on it was worth it. Javi Pacheco and Jano Valiente, a classic bike enthusiast  and a seasoned mechanic respectively, joined forces in late 2011. Since then they have completed 12 bikes, with a handful more to finish. Their latest offering comes in the form of a 1980 BMW R80 flat tracker, which showcases the Tarmac workshop’s talents beautifully. As mentioned, the bike found it’s way to the Tarmac workshop in pieces. This only made the start of the build easier, the engine being stripped down and carefully rebuilt. A coat of matt black paint covers the engine, one part of the dark aesthetic of the frame section of the bike. In place of the the stock carburettors sit a pair of Keihins, which according to Javi will ‘make for really smooth driving and more punch at high revs’. To keep an eye on how much punch, a universal speedo has been wired up and mounted on the handlebars. The rear frame is all new, a shorter hoop being welded to the bike frame. Beneath the custom hoop sits a pair of smaller passenger footpegs than the ones the factory fitted. The factory front footpegs were ditched as well, a set of BMX pedals replacing them. According to Tarmac, this helps with better access to the rear brake and gear change levers. This bike rolls on Avon Classic tyres, the short rear guard a custom make by Tarmac, fashioned inhouse on an English wheel. The Beemer’s handling hasn’t been neglected, with Tarmac putting their touches on the bike, so it can be as fun as it is goodlooking. The coiled rear shocks, donated by a Triumph Thruxton, sit inclined forward on the rear frame. At the front end, the forks have been lowered and treated to a set of handlebars from a Bultaco Sherpa. To raise the performance of the front brakes, a Honda ST1100 master cylinder pumps stopping power through stainless steel braided hoses.

It’s the neatness of the build, almost clinical in it’s manner that stands out the most. The lack of inhibition used when choosing the parts allows the bike’s lines to just flow, an example of this being the Montesa H6 headlight unit being used in the build. After less than two years in the bike building scene, Tarmac are producing bikes with the same level of skill as (or better than) builders who have been in the game for a lot longer. And with a handful of bikes waiting to be finished, we can be sure to see more bikes built by Tarmac Custom Motorcycles in the time to come.

So next time you are looking at a deconstructed bike, use Tarmac’s R80 as inspiration, and remember you will always be wrong about the build budget.

Photography by Yanka from Unopuntouno Fotografia