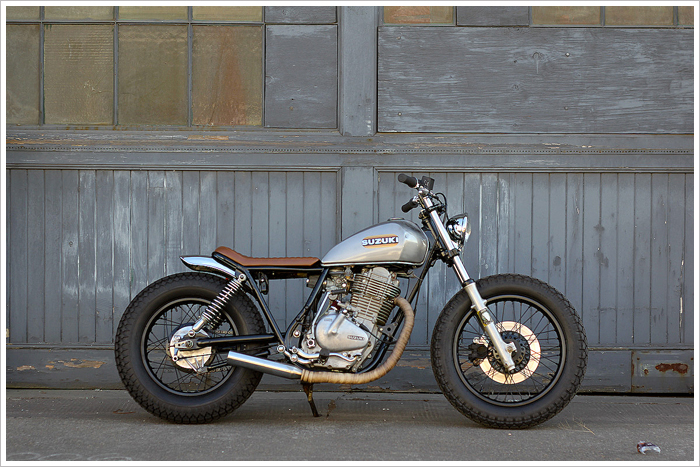 It’s hard to believe it has been over two years since we featured Holiday Customs first bike. Since then, they’ve attracted a lot of attention over the years for their fine wrenching work – in particular, their trademark Schwinn inspired Yamaha XS650. Jared from Holiday Customs has always been good at saving old bikes from extinction by recycling parts he finds around his garage. His latest project is this clean and simple single-cylinder Suzuki GN400. “I found the GN in Portland Oregon, but the bike shows some signs of being in Virginia at some point of its life.” says Jared. “There’s still a Virginia beach army parking sticker on the fork”. Instead of removing the sticker, he decided to retain this little clue to the bikes history. Thanks to some great Oregon weather, it took a little bit longer than usual to get this project started. Here’s Jared to explain the build: “It’s a 1980 Suzuki GN 400 that we found and sat around for a while this summer while we took full advantage of one of the driest summers in Oregon since I’ve been here. I rode alot of dirt and put alot of miles on my Schwinn style  XS 650. The GN didn’t put up too much of a fight, it was pretty solid to begin with. I’ve done a few of these brat style bike’s so I stripped it down and started cutting and cleaning. After all the metal work was done I gave the seat pan off to Ginger at New Church Moto.” “This is no show bike, like most of my bikes I’m taking old found parts and making functional motorcycles that I think look good. This one doesn’t have as many of those parts as usual though. It has a Harley headlight, Ducati/Brembo master cylinder, modified XS650 rear fender and some Harley muffler that I found. The rear tire is a Firestone and the front is a Dunlop k70. It has the stock carb, no battery, as it just runs off the mag. This little thumper is a blast to ride, makes me want to build one for myself soon.” Yes, it’s no show bike, and I’m pretty sure there will be the usual comments about the lack of blinkers and the infamous pipewrap/firestone combo – but at the end of the day, it looks like the kind of bike that would put a big grin across any riders face. And that’s what it’s all about. This little thumper is currently for sale, so if you fancy a stripped back single, then get in contact with Jared at Holiday Customs. As for Jareds next build, he’s building another Schwinn style bobber, but this time for a lucky chap in the U.K.