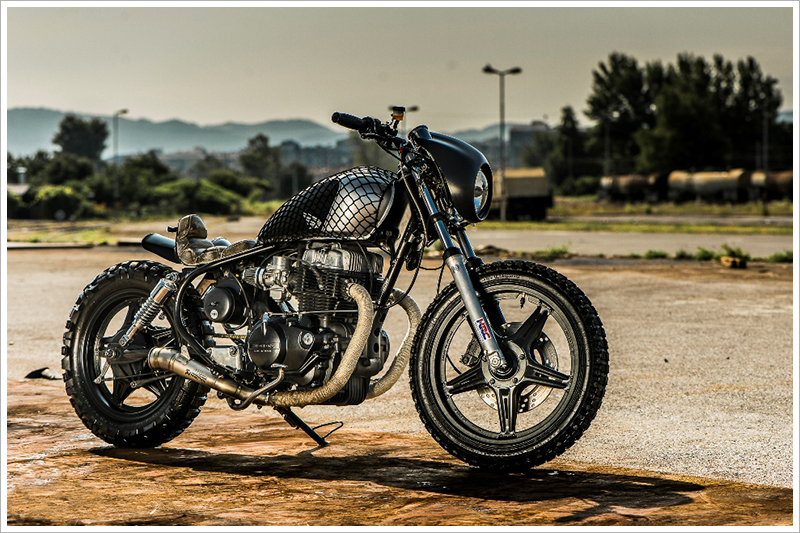 If everyone had the same style, the world would be a very boring place. If every bike builder followed what had come before, custom bike sites like this one would have trouble showing anything fresh. It’s with this in mind we are happy to feature 7Seven’s latest build, a 1981 Honda CM400T, a hardass ride that has the performance to match it’s tough aesthetic. Starting with a pedestrian model motorcycle, 7Seven has built a whole lot of awesome into the Honda twin over the course of the build. But above all, you can’t really get much tougher than reptile seat trim. To bring the bike from mild to wild styling, a full custom silver & black paintjob has been applied to the Japanese twin. Both the frame and the Comstar rims have been given the powdercoat treatment. This is in with a trend in custom builders using the factory Honda rims, even though this would have been unthought of not so long ago. The net over the factory fuel tank gives a reptilian look, to match the custom seat cushion sitting behind it. Perched beneath this is the custom battery box, a nice touch to replace the factory battery tray. The front end of the bike has been treated to an upgrade, Dime City Cycles MX handlebars ending in vintage grips, with short levers to round out the sporting visual. A custom dash panel has been fabricated, upon it is mounted a Dime City Cycles speedometer. The factory headlight is gone, replaced by a Harley Davidson sourced unit, wrapped in a HD fairing. The tail light hasn’t been left untouched either, a vintage Ford style lamp is perched atop the custom license plate mount. No slouch in the performance department, 7Seven has made sure the bike has the ability to take on any road surface you aim it at, testified by the photoshoot for this awesome machine. The powerplant has been rebuilt, a set of rejetted carbs inhaling through pod filters. The pipewrapped exhaust is a custom 2–1 system, finishing up in an Akropovic GP silencer. And silencer is a misnomer. The CM400 in it’s factory form is not an eyecatcher. 7Seven has taken great pains to ensure you won’t miss this bike going by, either aurally or visually. With it’s shorty exhausts finishing just forward of the rear rim, and ‘look at me’ styling cues, it may not be to everyone’s taste, but we’re glad not everyone has the same style. We’ll leave the last word to 7Seven: “This motorcycle definitely has two loud exhaust & the ride is rough. But there is something primal when driving this beast. Something that quickens the pulse, something that screams: ‘you are a bad, bad boy’. This bike is simply bad to the bone.”