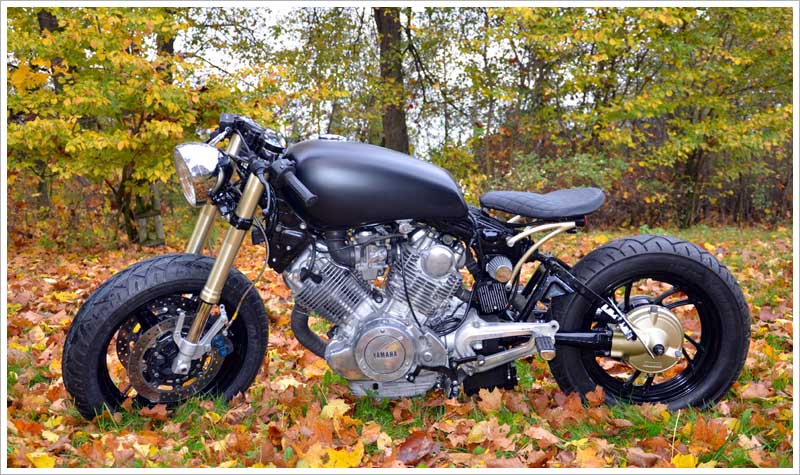 Most builders using the XV750 as a base for their custom project have usually been inspired by the likes of Classified Moto – who have shown the amazing potential of these previously overlooked donor bikes. Not Tony Mroczek from Poland (yes another one, we are big there). He has been inspired by something completely different. “The inspiration came from Tim Burton’s Edward Scissorhands movie” he says. “From an early age I’ve been completely crazy about everything related to Tim Burton’s creation”. Tony has also grown up with many different motorcycles. Actually, over the years he has owned numerous Yamaha’s and Kawasaki’s of every capacity, but now he is enjoying this custom XV he likes to call ‘Black Mat Ed’ – it’s the latest creation to come out of Tonys garage named ‘Fabryka Edwarda’ or ‘Edward’s Factory’ in english. Tony started this low-budget project by removing everything off the bike that wasn’t necessary. “I wanted to have a lighter bike with a thinner, dynamic look” he says. “That’s why there is no front or rear fender. The only massive, beautifully shaped part of the bike was supposed to be a tank and the front suspension which was taken from a 2001 Yamaha’s R1.” “The upside down forks look massive again and gives very specific, clear and strong character to the bike. The mounting seat has been created from scratch. Custom seat was bought from Harley Davidson and then painted gold. I decided to paint some other parts golden to match the front suspension. But first I had an idea to paint it brazen. I used a golden color because it contrasts really well with black – black frame, wheels, matt tank and other parts. And I think it looks very enigmatic… what I like most.” Tony wanted the exhaust to be modest and not very conspicuous. “But quite noisy” he says. The front rim, brakes calliper and brake plate also came from a R1. All tires are new and Metzeler Marathons. Battery is installed at the bottom of the frame, between two wheels. Tony decided to leave the stock tank, which has been slightly raised up. The tank isn’t quite finished yet though. “I will be painting the tank with Tim Burton inspired artwork, probably associated with Edward Scissorhands and Nightmare Before Christmas stuff.” Tony says he couldn’t have built the bike without the help of the talented brothers at Power Choppers in Poland. This young Polish builder is blown away by how much fun the bike is to ride. “It’s absolutely amazing to ride.” he says. “While riding you feel absolutely free. The engine purrs so nicely. It feels like you are cutting the air with a really sharp knife.” Or maybe with a pair scissors?