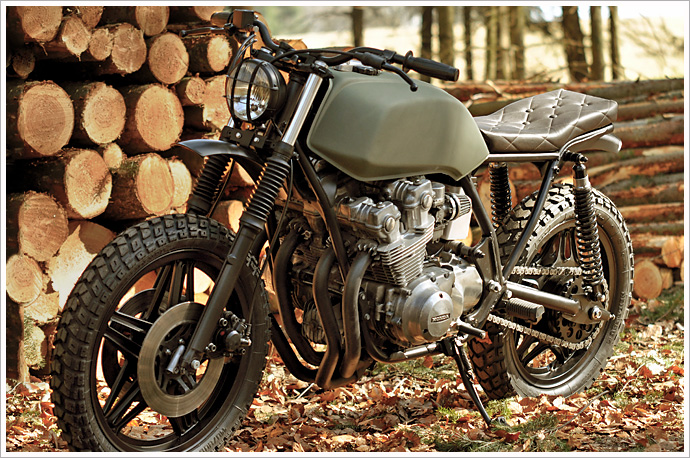 The smell of the campfire. The feel of sleeping rough. The taste of freshly caught trout. And the silence… the pure, natural silence. Sound good? Yes? Too bad you’ll never hear it, because on a bike like this all you’d know would be the echoing tear of the unmuffled 4-into-1, the smell of wet leaves on exhaust, and the taste of flies in your teeth. Who wants to commune with Mother Nature when you could tear her a new one on Left Hand Cycle’s latest creation, the LHC#2? “Left Hand Cycles started in the winter of 2011 in a small garage close to Zwolle, in the Netherlands,” says Left Hand’s main men, Richard and Lex. “We were aware that we had to overcome lots of problems and that’s why we chose the name Left Hand Cycles. We never pick the easy solution but try to solve it ourselves. We think a motorcycle must have a soul without any superfluous accessories. That’s why our mission statement is ‘less is less.’ Details are very important, but in a subtle way.” “The donor Honda CB750 is a motorcycle built in 1982 and we were very like minded on how it should look. We tried to create something original and rough, based on enduro motorcycles, but with a four cylinder engine.” “Certain details give the bike a unique character. For example, a double mounted sprocket based on our love for riding fixie bikes. The seat has a characteristic appearance of a leather chesterfield sofa. For the rest, we chose minimal. As we said, less is less. The Heidenau K60 tires give this bike an extra dimension. Turn the throttle, hear the sound of the open exhaust and watch the squirrels and deer disappear!” Any fixie fans out there?

“We think in motorcycling, a new has dawned. People are tired of riding ‘the same old stuff’ and want to differentiate themselves. No mass production, but one a kind. We built bikes ‘a la carte blanche’ with a LHC identity that is recognisable We share a passion for motorcycling, fixies, music, lifestyle and Los Molinos! We’re inspired by café racing and motorcycles from the seventies and we try to translate that to a 2013 bike. We hope you like it.”