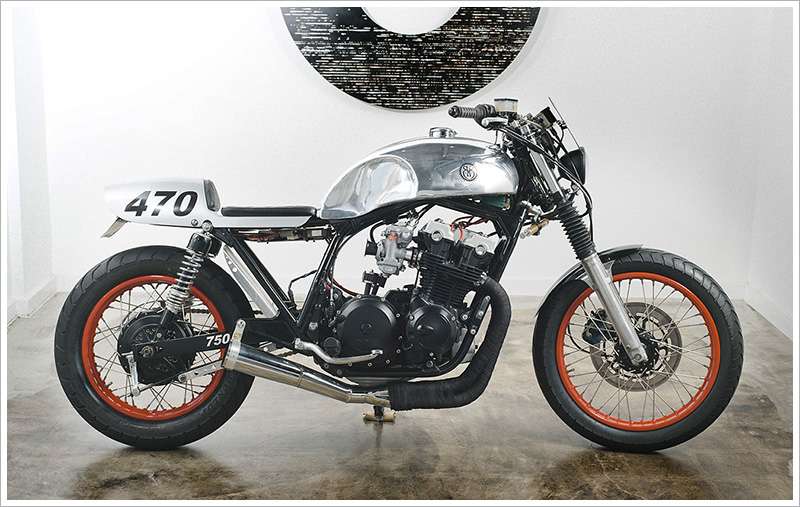 This is an interesting one. Usually when people build a bike as an ‘art project’, the bike will either become a trailer queen or end up sitting in a garage and rarely ridden. Not this one. It may have been photographed in the builders art gallery, but it has already raced at Bonneville during the 2012 Speed Week. This CB750K is the first build by Brad Barber, who has raced at Speedweek before but usually in a vintage BMW car. “I’m most proud of passing the tough Bonneville tech inspection first time through” he says. The bike raced well but missed out on doing the ‘ton’ by a measley 1mph. “I only went 99mph due to carb issues which is why I switched to the Keihins”. Brad is planning on taking the new and improved bike back to Bonneville next year and with a few mods is hoping to clock 120mph. The build started with a complete engine and transmission being rebuilt to stock spec with mild porting. For extra grunt, the carbs have been upgraded to Keihin CR-S 29mm. The frame was altered, detabbed and an aluminum panel added from the rear tank mount back. Square steel tubing swingarm was also added along with new vintage shocks. The front forks were rebuilt with new forks by Frank tubes, progressive suspension springs and cartridge emulators. Triple clamps have been reworked and reshaped. The Shorai battery has been mounted under rear seat with a custom mount. A complete wiring harness was fabricated with new vintage style connectors and new wire. The stunning aluminum gas tank was fabricated by the guys at Rock City Cafe Racers. The rear bodywork has been heavily modified from fiberglass part which was also from Roc City. The headlight, tail light, speedo and tach were bought from Dime City – Brad modified the taillight to fit into the kick up frame panel on the rear. The black pipe wrapped 4-into-1 headers make there way to a modified Vance & Hines exhaust – which looks like it makes a ballsy bark. Gauge mount, headlight mount, number plate, exhaust collector mount, hugger & hugger mount, chain guard, rear brake link,electrical component tray, and license bracket were all fabricated by Brad. The wheels are powder coated and laced with Buchanan’s spokes. The orange wheels have been wrapped in Dunlop Sport GT501 100/90 x 19 Front, 140/80 x 17 Rear. The leather seat pads are made from leather and were stitched by David Groomer of Houston. This bike took Brad over two years to build and even though it was built as an ‘art project’, it’s seen more action than Paris Hilton. Nothing beats a piece of art that can do the ‘Ton’ on a salt flat, don’t you agree?