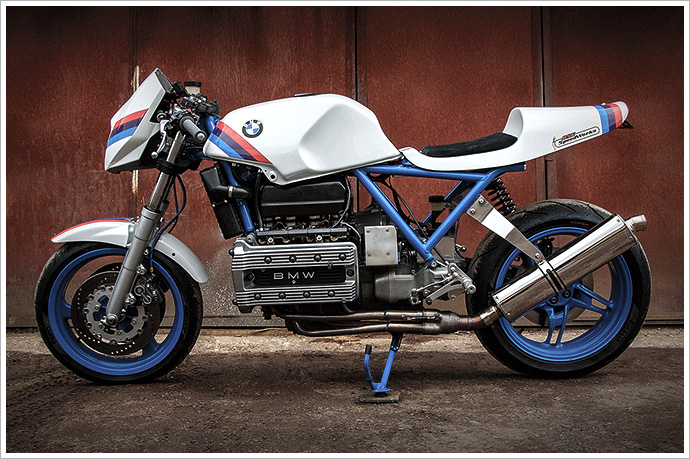 If you are anything like me, you’ll always have your latest ‘bike of interest.’ To the uninitiated, that’s the bike that is currently catching your eye. The one that you look at first when you surf eBay or thumb through the local classifieds. And for me right now, the bike is definitely the BMW K100. What it is about the K that really pushes my buttons, I’m not quite sure. Maybe it’s the ludicrous car engine laying on it’s side in the frame. Maybe it’s the shaft drive, or maybe it’s just the jaw-dropping mass of the things. Whatever the case, if I started a new project bike today, a Beemer K100 would be it. And it’s not just me who’s thinking along these lines. Take, for instance, one Ben Kingham of BSK SpeedWorks in Bedfordshire, England. He too has the bug, and I think it’s fair to say that he been bitten worse than I have. A lot worse. Here’s Ben. “My family has been in the bike business for over 100 years. In the early 1900’s my great grandfather owned a bike shop and sold some of the first motorcycles in the country, just down the road from where we are now based. Currently we specialise in K series BMWs, and are one of the very few places that supply performance/custom parts for this bike.” “What we know is mostly through racing our BMW K100 in the current BEARS championship and is backed up with over 30 years of building and racing classic bikes. We build replica Ks to almost any spec, for road or track.

Obviously a far cry from the original BMW K100 tourer that this machine was derived from, this ‘café racer’ is built for performance. Weight is kept to a minimum with more than 50kg in excess flab having been removed compared to the standard bike.” “The engine has been rebuilt with new parts fitted as necessary, including a new clutch and reconditioned oil/water pump, and with our improved air intake and exhaust system and a few choice tweaks, it does go.” Ben’s mods to the bike are obviously quite extensive. The engine has been mildly tuned, and should be putting out around 90 bhp. Ignition is supplied from a Bosch LE-Jetronic unit. The frame has been chopped, lightened, and strengthened. The rear shock is a RAM jobby, and the fronts are Goldline progressives. Rubber is 3.50 120/17 on the front, and 5.00 160×17 out back. The dash is an ever-popular Acewell unit. And to finish off, both the exhaust and the rear-sets are fashioned by the BSK boys themselves. Now it may interest some of you, especially those trapped in an unseasonably cold and snowy British Isles, that this exact bike is currently for sale. If you too have been bitten by the K100 bug and feel the need for some tilted four action, feel free to hit up Ben and the boys here.

(Photographs via the talented Matt at Bone Photographic)