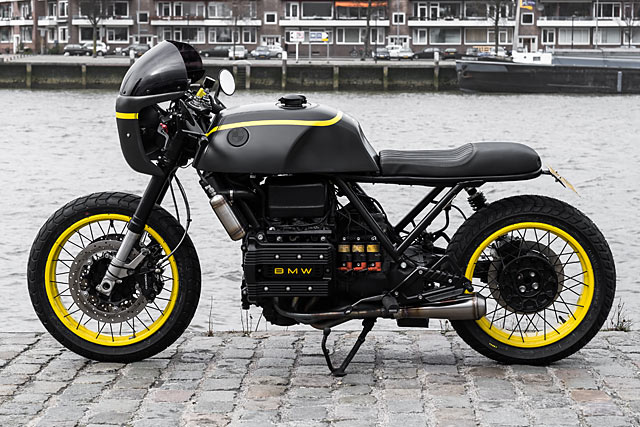 Keen-eyed readers of these pages will no doubt be familiar with Dutch motorcycle workshop Moto Adonis. Just a few months back they turned out this spectacular R1100S build that’s equal parts beautiful and terrific to ride. This time around Daan Borsje and his team have returned to the marque, crafting this incredible cafe racer based around a venerable 1987 BMW K75 tourer. The customer for the build, Philip Van Gelder, is a fellow Dutchie who seeked out Daan to make his dream build come to life. After only a brief chat, possibly over a smoke and a pancake, he decided to get Moto Adonis to tackle the project. ‘We talked about the art of riding and building,’ he says. ‘Daan is a sharp-minded fellow who knows a lot about motorcycles. Which is nice to know when you’re about to drop your savings on a custom cafe racer.’ The conversation quickly turned to the donor bike, a ride not especially well known for its attractiveness. ‘At first sight it’s not the prettiest of bikes,’ Philip admits. ‘It clearly hasn’t got the looks of an air-cooled BMW R-series which are so popular these days. And it’s not as sleek as a Japanese motorbike.’ He’s right, of course. But it does have one redeeming feature. ‘The chunky square-shaped engine,’ he says. ‘No wonder the first K-series were nicknamed ‘the Flying Brick!’ As much as Philip loved the engine, the standard mag wheels had to change. The front comes from a R1200C cruiser which wouldn’t have been too hard to source, with most of these bikes now permanently parked by their riders for fear of being mistaken as Pierce Brosnan’s Bond whenever they take them out. The forks come from a GSXR1100 and retain the twin Nissin 3 pot calipers. At the rear the rim comes from a round-the-world R1100GS adventure bike. To mount it properly Daan had to replace the complete rear end drive. All that hard work has another benefit too – it now has a disc instead of the standard drum. On the electronics side the bike runs high-end Motogadget equipment everywhere. Indicators, controls, wireless switch and grips are all from the German high priests of electronic wizardry. It all runs through the genius Motogadget M-unit brain box. The trick electronics extend to the back-end, where the K runs Rizoma Club S indicators and brake lights fitted inside the flat seat. ‘Hell, that was some job,’ Daan remembers. ‘But we nailed it. The lights are now so bright you need to put on sunglasses before looking at them.’ You might also need some eye protection when looking at the bike dead-on, with it now sporting a quattro LED white light. Sitting up behind that, hidden away in the fairing are Japanese daytona instruments. But despite all that work something wasn’t sitting right. The standard tank has more plastic propping it up than an Orange County housewife. And when those plastic shrouds are removed it exposes a kink at the base of the tank that ruins any chance of a consistent flat line from the seat to the front of the bike. ‘I suggested using a R100 gas tank but it was too narrow to fit,’ Philip says. ‘Instead, Daan suggested stripping and cutting the tank and extending the base.’ After giving Daan the go-ahead he received a series of photos of the new look a week later. ‘He sends me this smooth, streamlined sexy-as-hell gas tank. He blew me away!’ It’s easy to miss how neatly it’s done – like some of the best welding and fabrication, it’s hard for astute people to gauge just how good it is from only a few photos online. While Daan was completing all the fabrication for the BMW cafe racer, Philip was mulling over paint schemes. In the end he settled on a black and yellow colour scheme. Phil’s a designer by day and the conceptual part of his brainbox drew inspiration from an interesting source. ‘To me these colours represent a deep-rooted warning from mother nature,’ he says. ‘Snakes and bees who wear these colours are not to be messed with. The bike’s light, fast and aggressive.’ ‘It reminds me of some famous words,’ he muses. ‘Floats like a butterfly but stings like a bee… mer.’