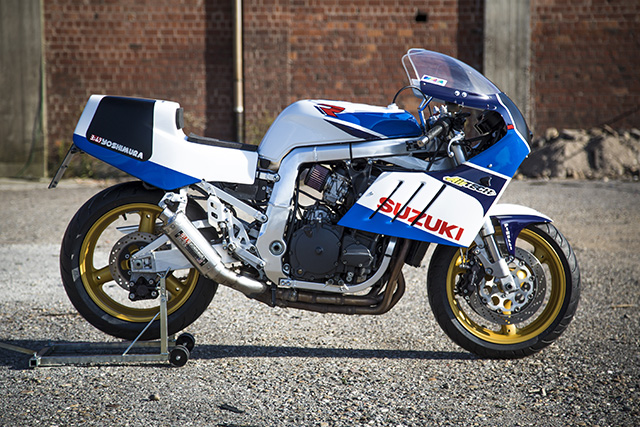 Rarely is customising a motorcycle a wallet friendly activity, but for the cost of a crappy 90’s hatchback you could be riding this Yoshimura Suzuki race replica, that’s definitely hard to argue with. Patrick Sauter of Germany is no stranger to these pages – having built a very polarising CX500 rat bike a year ago – but this time he has turned his hand to a whole new style of bike and done it for a very lucky family member. Pat was flicking through photos of Yoshimura race bikes from 1985 when his uncle mentioned he had a hankering for a new motorcycle. Well there’s a man after the heart of a legend, because Hideo “Pops” Yoshimura used to love building wild street bikes just as much as he did his race winning machines. The founder of the famous Yoshimura brand and ace tuner/director of many a winning team Pops loved Suzuki’s of all shapes and sizes. So Pat offered his uncle a deal he couldn’t pass up, he’d build him a road legal race replica of the 1985 Yoshimura AMA bikes and he’d get it done for just 2500 euros including the purchase price of the bike. Pat started bike hunting for just the right GSX-R for the job but the bikes of the 1980’s are starting to become hard to find and the ones that are available tend to be either in mint condition demanding mega dollars or well past their used by date. So the sensible decision was made to find a later model bike and then convert it to give the old school feel. For just 700 euros Pat found a nice 1994 GSX-R 750, a GR7BB German model with the bigger carbs and no emissions gear like the US bikes. A Yoshi special is nothing without the right body work and it was this area that was significantly different across the 80’s and 90’s machines. So Pat set about disassembling the entire machine to ready it for some retro parts for the ultimate road legal race bike look. He found exactly what he was after from large supplier Airtech Streamlining in the US who make a replica fairing kit of the AMA Yoshimura F1. With the kit shipped to Germany and fitted up to the later model Suzuki it was time for paint and graphics. First order of business was to paint all the panels in arctic white, before vinyl graphics in Suzuki’s racing colours were applied along with the right sponsor decals. The Gixxer now looked the part but to be user friendly required a few additions to that of a race machine to make it work on the street. A small hole was cut in the front fender that allows a small headlight to poke through for night time blasts. A tiny LED rear light is mounted to the license plate bracket that supports the perfect set of numbers and letters for the build, GSX R 750. While it was common in the 1980’s for a rider to sit on pure fibreglass Pat has added some seat foam to both the base and the hump to keep his uncle relatively comfortable. Extracting a few extra ponies is not too hard out of the well-engineered 750 engine and the slightly larger carbs at 38mm fitted to the German model make it that much easier. Helping them breathe is a pod style air filter that gives a rorty induction noise and a raceier look. If there is one thing you could absolutely NOT leave off any Yoshimura build it’s the mufflers that have kept the company famous long after Pops passing. The Suzuki’s 4-2-1 manifold exits at the right side with a Yoshimura USA race can barking to the sky taking pride of place. Fully adjustable inverted forks at the front and an adjustable rear shock mean the GSX-R was a good handling machine in its day and remains so some 20 years on. Factory brakes were also class leading with a 3 disc setup including twin 310mm Tokico’s at the front. But one area that has improved rapidly with time is tyre technology and Pat has treated his uncle to a set of Pirelli’s new sport focussed, extended mileage tire, the Angel GT. They wrap a set of factory 3 spoke rims that are in immaculate condition for their age, that Pat had powder coated in tiger gold for a stunning finish. With the build done all that was left to do was for Pat to hand his extremely lucky uncle the keys. Sure he could be driving the streets in some basic 1990’s Volkswagen listening to AM radio. But for the same price and a little hard work by his very talented nephew, Pat’s uncle is hammering the German streets race style on a tasty Yoshimura machine – Pops would be proud.