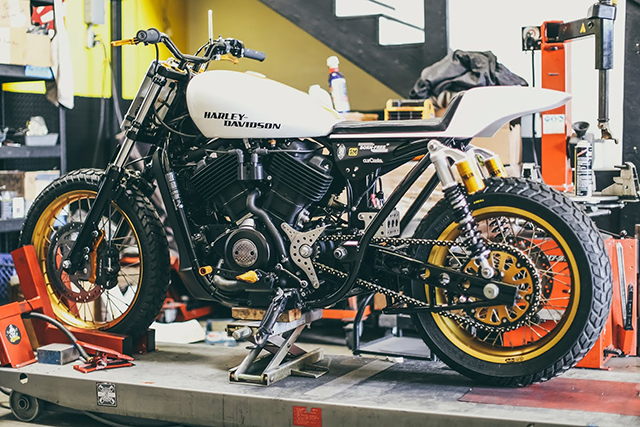 With Harley-Davidson recently unveiling two new models, the Street 750 and Street 500, we were wondering who would be the first to customise one. Well, we don’t have to wonder anymore. The guys from The Speed Merchant were approached by Mike Davis from Born Free on behalf of Harley to see if they were interested in customising one to be showcased at the Born Free show. Of course they said hell yeah. “Having never seen one in person, it was very intriguing” says Brandon from The Speed Merchant. “The new Harley-Davidson Street 500 is what showed up at my shop with about 3 months to get the job done.” They were given an open brief by Harley, but with all the choppers at Born Free, they wanted create something a little different that would stand out from the crowd. Speed Merchant engineer and designer Brandon “Brawny Built” Holstein decided to build the bike with a nod to the Flat Track tradition. He started by removing most of the stock parts from the bike. Front end, wheels, bars, rear fender, battery, rear subframe, and exhaust – shedding 50lbs (22kg) from the stock bike. He replaced the stock wheels with some Sun Aluminum rims with SS spokes laced up to HD hubs. The front end was replaced with a set of Speed Merchant mid glide trees made for the HD 48 Sportster. Huntington Beach Harley Davidson donated the front end to the build. They topped off the front end with SM preload adjusters. To finish up the front, Brandon made a classic styled aluminum number plate that incorporate the overflow for the radiator and a LED driving light supplied by Lazerstar Lights. Brandon used a Speed Merchant radial mount brake bracket up the front and mounted a Tokico caliper to it. The bars are a custom set made in house as well. The controls are off a GSXR 600, and 750, topped off with some Pazzo levers. The throttle is a 1/4 turn set up from Joker Machine – used mainly for speedway. “Next I decided to mount the tank in a different position” says Brandon. “I raised the tank by about 4″ to provide a more traditional stance. To match the line of the tank I looked at the tail section next. After cutting off the stock subframe and pulling the wiring from under the seat, I started laying out the new subframe set-up. Part of the new subframe houses all of the stock wiring just under the seat. The new tail section was shaped out of aluminum. Once the tail section was finished, I fabricated a seat pan that was handed off to Bates Leather. They nailed it with this custom tuck and roll design.” To change the stance of the bike, the guys at Speed Merchant used some tall rear shocks supplied by Ohlins USA. “They were kind enough to support this build.” The taller shocks provided extra ground clearance and helped to enhance the stance of the bike. To round off the rear section of the bike, Brandon decided to modify the rear swingarm by adding some extra bracing and hollowing out the square tubing. Then they made a battery box to mount the 8 cell Anitgravity Battery just above the swingarm. Having such a new model created some challenges for Brandon and his crew. Like trying to find a front sprocket to convert this bike to a chain drive. “Luckily I was able to find one. I used a Super Sprox rear sprocket, with a black EK 530 chain. I made a custom aluminium front sprocket cover. Rounding out the rear end was a radial brake bracket with a Tokico caliper to match the front.” The last thing that SM fabricated was the custom exhaust. Cone Engineering donated a 2″ core muffler for this build. Brandon used this and then recreated the front headers to fit the bike – a full stainless system is just what the doctor ordered. The paint was done by John Edwards of Old Tyme Custom paint. SM wanted to keep it really clean and simple, but highlight the gold on the bike. Once the color was laid down the bike was handed over to Pacman Line & Letter Company to pinstripe and hand letter the Harley-Davidson. Then finally some pearl was laid over the top before clearing it. The bike was unveiled at last weeks Born Free 6 and attracted an unprecedented amount of attention – with a constant crowd around the bike for the whole show. The guys from Speed Merchant sum it up best with this quote: “In a sea of choppers, it was for sure, the dark horse and a massive attention grabber.” Photos by Mike Quinones from ourCaste