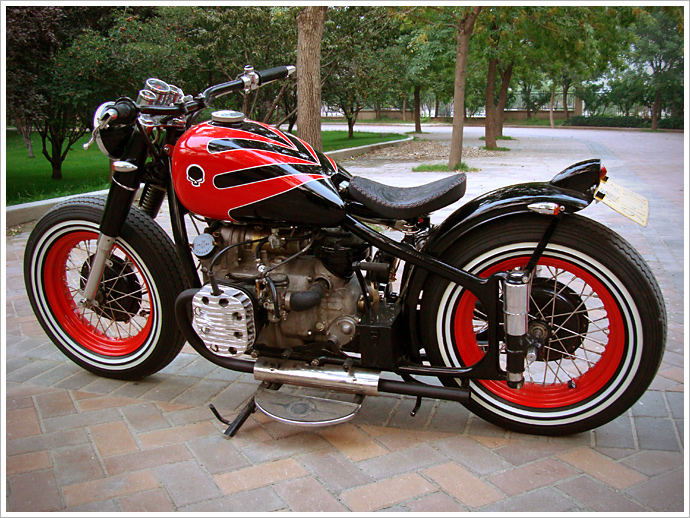 If The Punisher was a Red Army assassin, he’d ride one of these. Probably

It’s funny how the world works. Two weeks ago we would have laughed if someone had told us that Chinese bikes would be featuring heavily in our upcoming posts. But here we are two weeks later and presto change-o here’s our second sweet-ass Chang Jiang straight outta downtown Beijing. This one’s the result of some hard work by ex-pat Thomas Koehle and his shop, 4444 Design. The more we hear about these “Changs” the more we’re liking them. Cheap and reliable with a design that essentially hasn’t changed since before WW2, the bike is common as smog in China and amazingly (for a Westerner, at least) you can by spares directly from the Red Army. How cool is that? It doesn’t matter how many times we see them, we still love those cylinder heads

“My name’s Thomas. I’m located in Beijing China since mid of 2007 working for a international car manufacturer. All around here in Beijing mainly foreigners ride those old Ex-Chinese Army Chang Jiang bikes. The technical design of those Changs actually is based on old R71 Beemers – back in the 1930s right before WW2 Hitler gave the drawings to the Russians (the had an alliance before Poland was invaded) and they still produce similar bikes – today known as URAL or DNEPR. In the 60s & 70s the Russians forwarded the drawings to China.” “I was hot on one of those vintage looking rides. A lot of shops around BJ restore them but not any sign of real “customizing” – just changing colours and playing around with chroming and polishing. Not what I was looking for. I had my own ideas but most of the stuff/parts I would need ain’t available in China. Although a lot of stuff is produced in Taiwan, still it is pretty difficult to get parts here.”

“So I imported most of the parts of my Red/Black ride via suitcase on business trips to Europe or as oversize luggage. It took plenty of time to get all the parts here and each time I showed up with motorbike stuff at the customs the guys wondered what to do with all those parts. Imagine someone hanging around customs with 2 fat whitewall tyres on the luggage trolley. That was me…” “Friends got attracted by my creations so I sold some of them. The more rides I finished the more parts i needed and so on. The “business” does not really pay the rent but more a hobby and each bike I finalize I use to finance the following ride. Not counting in the hours of search for parts, ideas, playing around with opportunities and trying new things. So far I’m the only one converting the 19 inch wheels of the Changs to 16 inchers with donuts.” From Hitler via Stalin and Mao. Must be good for your ego, then

“Since I started modifying Changs I have finished 5 custom bikes and a couple of WW2 repro Beemer-sidecars. My next project will be a bobber with springer front end, modern Beemer engine and some other gimmicks which I will do together with another bike builder here in BJ. For all my customs I usually leave the engine and gearbox untouched. I buy NOS engines (which are still available surplus from the Chinese army) or ones with low mileage. The 24 hp boxers are pretty reliable so a full check, cleaning and proper maintenance is enough.

The whole project starts with a sketch, then I check whether the coming owner is satisfied and then start hunting for parts. The Red/Black ride initially was meant to be for my wife. Such a bike usually adds up to about 50.000 Rmb (approx. US $8,000) which ain’t that much for a personally customized ride. Too expensive for the average Chinese national so most of my rides go to foreigners, exported already to NZ, France and Germany.” Red/Black alongside another of Thomas’ creations

In our communications with Thomas, he’s let us have a sneak peek of his latest Chang – one that he’s named “Diablo”. If the powers that be at the Great Red People’s Party for the Glorious Advancement of Ancient Chinese Two-Wheeled Motorised Transport Department in Beijing receive the duly submitted paperwork, in triplicate, then expect even more of these Red beauties in the very near future, fellow comrades.