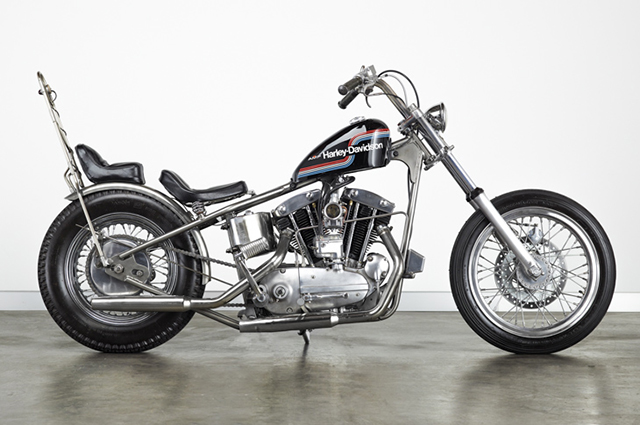 Building a custom motorcycle usually takes time and a lot of knowledge. Jared Smith from El Cerrito, California, had the time but didn’t have much knowledge when it came to building his first bike. 12 months ago when Jared started building this 1960 XLCH Ironhead, he had never welded anything. After picking it up cheap as a non runner that had been completely spray painted black, he started the steep learning process of rebuilding the bike from the ground up. Jared had a clear vision of how he wanted the end product to look. “I was going for an ‘old but loved’ look to the build” he says, “and purposely used vintage components where I could that had not been refurbished, everything else I wanted to make by hand.” Over the next year he started a crash course in welding – mostly as a student at the prestigious ‘School of Youtube’. Meet the Ironhead aptly named the ‘The Bad Investment’… Jared started by stripping the bike completely the day after he picked it up from the 8 hour drive from his home. After stripping it all the way down, all that he wanted to keep were the engines cases, the frame, and the seats… everything else was to be replaced. “The motor needed a couple new cylinders, new pistons, new heads… basically the motor needed a new motor” he says. He decided to give the engine to the professionals and got Hannan’s Machine Shop to rebuild the top end and S&J Cycles in Santa Rosa to rebuild the lower. The end result is basically a brand new Ironhead motor with just a little more get up and go than stock. Aesthetically, Jared knew he wanted to run a red, white and blue AMF tank. After scouring Craigslist he finally found one with the gas marks and eroded paint down one side, it was perfect and had just the right amount of history he wanted. “That’s the point of using all these old parts, they all have a story – that’s what’s exciting to me – combining vintage parts with new fabrication.” One of the first things Jared fabricated was the sissy bar. “I laid out all the parts with string and drew full size renderings of it several times before I started cutting and bending. I wanted the lines of the cross brace bars to mimic the lines of the stripes on the AMF tank” he says. The ring at the top where the taillight lives was the last detail Jared added. The taillight is an old warning panel light Jared picked up at an estate sale. He machined a new inner housing for the taillight that has internal and external threads for it to all fit together snug around the ring on the sissy bar and to hold the eclectic Turkish coin with deer on it as the backing plate. The velocity stack for the Mikuni carburetor was made from a 4″ round stock of 6061 aluminum, which Jared turned down and bored out on his lathe, then drilled and tapped for set screws at 120° offset. It has just enough clearance to be a tight press fit and hold the grill tight against the throat of the carb. The detailed grill is from a 1920’s Zenith dynamic microphone. Some of the many other details on this meticulous first build is the handmade rear fender, vertical license plate (with Jared’s Blue Jack logo acid-etched into it), footpegs, shifter, mechanical brake arm linkage, carb slide topper and headlight mounting bracket… and the list continues every day. The most impressive thing is that only a year ago when Jared brought this lifeless Ironhead, he had some hammers, old junk tools, a $90 dollar flux-core welder and barely any knowledge of how to use them properly. Now a year later, his garage has a metal lathe, a tig welder, a drill press, a belt sander, a disc sander, several buffing and polishing machines. But more importantly, he has gained a wealth of knowledge that you can’t put a price on. It sounds like ‘The Bad Investment’ was a good one after all.