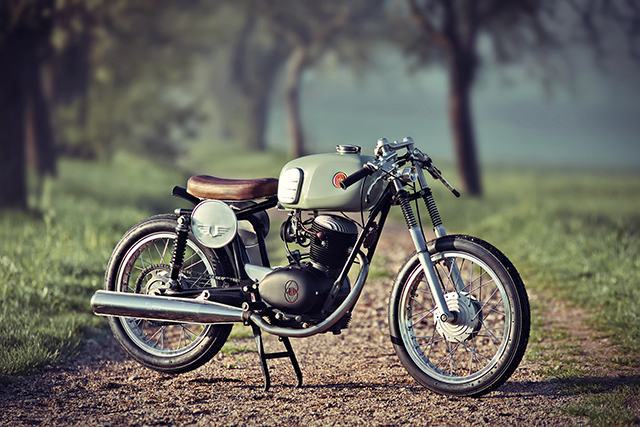 You don’t hear much about Gilera these days, but there was a time in the 1950s when they dominated GP racing winning six titles in eight years and also tasted success at the Isle of Man TT with the legendary Geoff Duke aboard. Their last major racing success came when the late great Marco Simoncelli won the 250cc World Championship in 2008, but now owned by the giant Piaggio group they largely focus on the European scooter market. It wasn’t always that way for their road going offerings, in the heyday of the Italian single cylinder one of the bikes to own was a Gilera four stroke. Having tasted so much racing success in the ’50s the company took their technology to the road in an effort to boost struggling sales and it was the character filled singles, particularly the Gilera Giubileo range that would give consumers an alternative to the plain functionality or clunky two strokes that made up the bulk of the world’s offerings. For Christian Schwarzenlander of Austria’s ExesoR Motorcycles it had been a dream to build an Italian single, to re-imagine the period in his own way and remind the custom motorcycle scene why the Italian’s had captured the world’s imagination so much. “The style of the 60´s single engines and the pure design of this era is unmistakable. Especially the Italian manufacturers as Moto Guzzi, Ducati, MV Agusta and Gilera came up with little motorcycles which impart La dolce vita.” So when a 1963 Gilera 106SS came up for sale he knew he had to have it and it had the extra desirability factor of being quite a rare bike in Europe with most of the 106SS’s shipped to the US market. Although he secured himself a rare beast, other than the engine running ok the rest of the bike was a disaster. But this never phased Christian who specialises in fabricating the bulk of parts for his builds himself and with the little Italian fully disassembled and on the bench he knew exactly what he was working with. With the bikes parts laid out it was evident that the majority of components were either not fit for use or would require drastic restoration. Starting with the little frame the tail section and fender were removed and the seat rails cut back to near the shock mounts and plugged with machined items Christian designed in house. The frame and swingarm was then stripped of their half century old paint work, ground and sanded smooth and re-coated in a new lick of paint to bring it up to Christian’s standard. With the shortened rear end and the standard smooth line fender of the original beyond repair came the idea to add a little more vintage touch with a 1930s Triumph unit cut to fit and finished out in frame matching black paint. The generous front fender for such a small bike was a Gilera trade mark, giving even their cheapest machines beautiful body work, but having already gone for a different look in the rear the decision was made to leave the front end as minimalist as possible for a touch of racing nostalgia. If Gilera did beautiful body work it was their fuel tanks that set the standard and once again proved the cream of the crop in the small cc category. From tanks with perfectly symmetrical knee dents, to rounded items with blown out shoulders and swooping lines they yearned to be touched with the cleaning cloth much more often than was really required. Myth had it that some were styled on the rear end of some other famous Italian models but the unit fitted to the 106SS was more befitting of the racing pedigree of the mark with pressed out sides and sculpted knee indents to be able to tuck in on the little single. To see exactly the state of the metal he was working with Christian sand blasted the tank but this was complicated by the fact he was desperate to keep the permanently affixed Gilera emblems. The same delicate work with the sand blaster was needed with the paint gun to not damage the badges but he pulled it off and it was more than worth the extra effort, with metal knee pads in place of the old rubber items the tank alone is a masterpiece. While the tank caught the eye it was the little single that could which made the Giubileo so beloved by the Italian masses. Ranging in size from 98cc to 175cc it might not have made a lot of ponies, some less than a dozen, but class leading valve technology and 4 stroke smooth revs made it a bike you just wanted to ride and ride. The US market 106SS features a single carby, 106cc engine with magneto powered ignition and slick shifting four speed box. While it ran when Christian picked it up it required some TLC to get it moving the way it should and the aesthetics needed a thorough make over. Raw metal rear mounts let the flat black engine case and barrel take centre stage with the machined Gilera logo in red a custom touch that gives the little engine a meaner look. A vintage look lead fires the new plug and with the stock muffler a rusty mess the replacements is one of the few new parts fitted to the build. The other new parts to make the grade are the retro look high shouldered aluminium rims that were swaped in for the unsalvageable originals and fitted up with vintage look rubber to give the best of both worlds. With blasted hubs and rebuilt brakes front and rear the little Gilera hauls up nicely as it squirts between the corners. Giving the bike that mid corner speed is a set of remarkably small diameter front shocks that in stock form are covered by more Gilera body work.

With this too destroyed by metal cancer, Christian left the covers off to expose their internal workings and with a complete rebuild they are back to their best. But the small diameter posed a serious problem, off the shelf clip-ons were too big in even the smallest of sizes and even the moped items that secured the job required Christian to machine a set of sleeves so that they would fit. Out back the stock twin shock rear has been given a full overhaul, with Gilera race number plates fitted in front of them instead of Gilera’s more common rearward position. A set of Aluminium Tomaselli “Matador” style levers are fitted up to the moped bars and along with new grips and an uber simple switch setup create a remarkably clean look. Bucking the trend of the rest of the bike is a truly modern three bulb headlight mounted in a tiny custom aluminium housing but in it’s raw machined aesthetic does nothing to take away from the continuity of the build. To retain some of the vintage look that was so important to Christian in the build and keep a hint of the original patina that accompanied the machine he bought “the hooter, air filter, tank filler cap and the kick start lever remained untouched.” A beautiful reminder of a golden era in Italian motorcycllings past, which is exactly what Christian has created from his Austrian base. With prices rising constantly on classic Italian singles and many lost to the rust gods the ExesoR Motorcycles Gilera stands as a fitting recreation of the most important era in the company’s turbulent history.