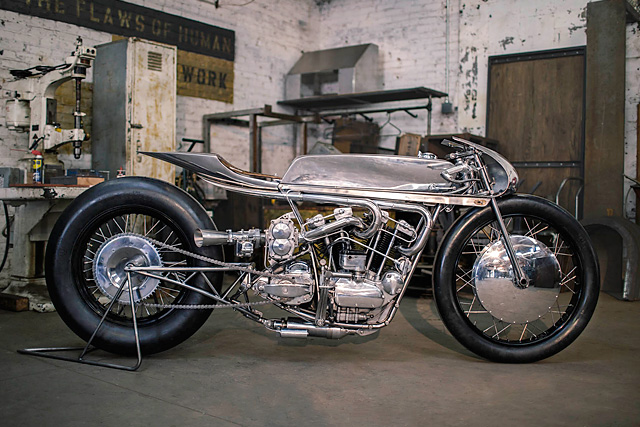 “Art” is a word thrown around in the presence of many a creative human endeavour. Which is all good and well if your area of interest is music, painting and the like. And that’s because those particular means of expression require you to start with nothing before you have something. But when it comes to custom motorcycles, this is all flipped on its head. Why, you ask? It’s because 99% of all custom bike builds start with a factory-finished product that is subtracted from and tweaked until what’s left is deemed “finished.” But not this bike. This bike has been hewn from raw materials the way an alchemist might create precious metals from base elements. This is the latest bike from Los Angeles’ Hazan Motorworks. This is art. For those of you unlucky enough to have never crossed paths with a Hazan Motoworks bike before, a little research will shed some light on the unique way that Max, the shop’s owner and sole fabricator, likes to work. Put simply, Max builds ground up and from the engine outwards. “I started this bike in the same way that I started my last few major projects. The idea was to build the most amazing bike that I could possibly imagine around an interesting engine and to make absolutely no compromises in the design and fabrication process that I used to get there.” Initially, Max planned for a bike that was going to be a simple, streamlined, black steel creation based around a 1949 BSA 500 that he had purchased. But once he saw how the Indy car tires he chose for the bike’s rubber dwarfed it, he went shopping for a larger engine. “Then I found the ‘65 XLH you see here. I cut off the transmission, welded the rest to my build table and went about drawing the bike I saw in my head at full-scale behind it. Surprisingly, what came out was an 8.5ft long sports bike.” [superquote]“The goal was to make a bike for myself exactly the way that I wanted it.”[/superquote] “Almost every piece of the bike was made from scratch; from the rear sprocket to the front hub, this bike started off as sheets, tubes and metal billet. The goal was to make a bike for myself exactly the way that I wanted it. And that meant making everything myself.” The first thing on the bike that draws your eye is the moon-like front drum brake. Although it appears somewhat proportionate in the photos, Max notes that at 16 inches across, it is pretty damn big in person. It started out as a 400 pound block of aluminum that he planned to machine himself. “Then, after about 30 seconds of thinking the idea through, I decided to have my friends at Emory Motorsports take care of it on their CNC machine.” The results of the outsourcing decision quite clearly speak for themselves.

And the front end that holds the drum is another first for Max; he concocted a bespoke, 4-link, girder-style suspension set-up that uses a fully adjustable air shock. Despite it maybe looking a little delicate, the main structural elements use steel with a 1/4″ wall thickness to keep things on the straight and narrow. [superquote]“…and before anyone asks, no, the seat is not comfortable.”[/superquote]

“The rear suspension uses a Buell shock and a fully adjustable swing arm linkage that eliminates the need for wheel adjustment at the rear axle as the arm can be made longer or shorter at the pivot point. All of the bodywork is aluminium and the gas tank is also housing the oil tank between the frame tubes. And before anyone asks, no, the seat is not comfortable.” It’s not like any red-blooded builder would need their arm twisted to put a blower on a bike, but remarkably the decision to add the supercharger was based as much on Max’s concerns regarding the large space between the two wheels as it was on getting some more horsepowers out of a pretty tame engine. The numbers are not staggering by any modern standards, but Max says it puts out between 80-90hp (up from about 50) and weighs about 385lbs dry. The engine uses stock cams that Max rearranged to run on two front cylinder heads, along with some fairly conservative 8.5:1 ratio pistons to accommodate the new-found boost. “The supercharger was a true $200.00 eBay find and I have no idea what it originally came from; it needed a custom drive but it works very nicely. It’s overdriven to make about 6psi and it’s fed from an old S&S L-Body carb with big jets. I used a modern six speed right drive transmission and made my own clutch to keep the bike slim.”

“This bike is something that I built for myself to enjoy and – like my other builds – it was made to be 100% rideable, reliable and functional but obviously not practical. It is not very comfortable and there are much easier bikes to operate, but this is easily the most exciting bike to ride that I have built so far. I hope you like it”