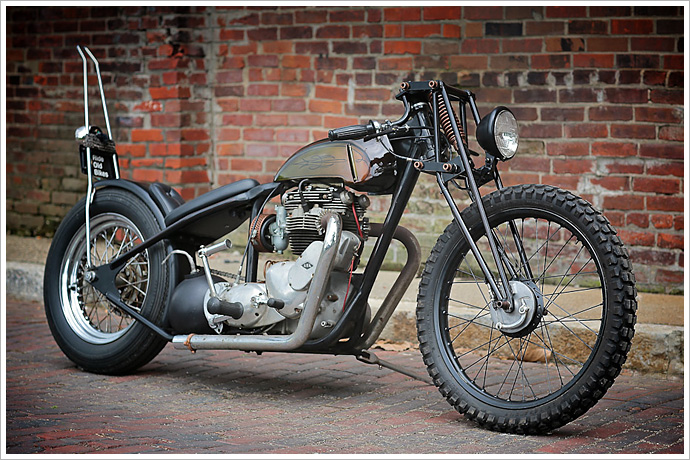 There’s a lot of talk of ‘barn finds’ in the bike restoration scene; that mythical, magical moment that happens once in a lifetime (if you’re lucky) where you stumble upon a bike lost to the world that turns out to be the last of its kind in existence. And then you win the Lotto twice in the same day and become the President of the World. That’s right… chances are it’ll never happen. The more likely scenario is that your dream bike is a basket case that’s been abused beyond all recognition by an army of previous bad taste owners and you’re the only one who sees the diamond in the (chopper) rough. Because that’s exactly what happened to Donny Greene and the lads at Retro Wrench in Louisville, Kentucky. As with most of bikers, the Retro Wrench boys obviously keep a close eye on the classifieds. A typical neglected project chopper/digger project popped up on Craigslist and the emails amongst them began to fly. It was exactly the build they had been waiting for. They ended up with a 1965 Triumph TR6 that hadn’t run since the early 90’s. Upon further inspection, they found matching serial numbers that showed it was a limited edition “SC” racer also known as the “Desert Sled”, built at Johnson Motors in Southern California and TriCor in Baltimore. The first order of business was removing the Harley peanut tank and ape hanger handlebars and getting it back to its racing roots. So Matt Westbrook, James Kemp and Chad Francis from the Retro team went to work. The bike came equipped with a belt driven ARD magneto and with a little tinkering, a few parts and a complete rewire the electrical system was back up and running without the battery one of the previous owners had installed. The boys developed an effective, if not drastic, answer to Kentucky’s tail gating epidemic

The focus then moved to the motor. Despite their worst fears of metal shavings and siezed internals, the antique lump was in much better condition than they had expected. With the carbs rebuilt, gaskets replaced, a bunch of TLC and a couple of tickles later… she was ready and running. Meanwhile, shop fabricator Brad White aka the ‘WhiteNoiseMaker’ was busy, too. With his eyes on a suitable tank replacement, he started with a Yamaha T1 gas tank which was narrowed by an inch and a half, cut on the bottom to clear the engine and frenched for fuel sight glasses down each side. Then the ACME cartoon bomb oil tank (formerly an aircraft fire extinguisher) was shaved of all gauges and brackets, cut and welded back together to clear the fender and chain. The stainless wick was conceived by Louisville chopper legend, Jinx.

Remarkably, the paint was also done in house at Retro Wrench Garage, with cups and cups of pearl in the clear coat while Josh at Culver Customs laid down the tasteful pinstripes. The bars were dropped beneath the shortened girder forks and cut narrow for lane splitting. The 21″ dirt bike front wheel and knobby continue the digger look. Good ol’ Triumphs – they’ll run on just about anything

The finishing touches included the seat and fender, which were built to accent the bike’s original old school sissy bar. With all the compression and subsequent giddy-up of a bona fide desert racer, the bike is aptly referred to by the Retro Wrenchers as the “F-Bomb”. The end result is a vintage bike with great lines and a silhouette as evil as Electric Wizard sounds. And as someone who’s just heard them for the first time, that’s really saying something.