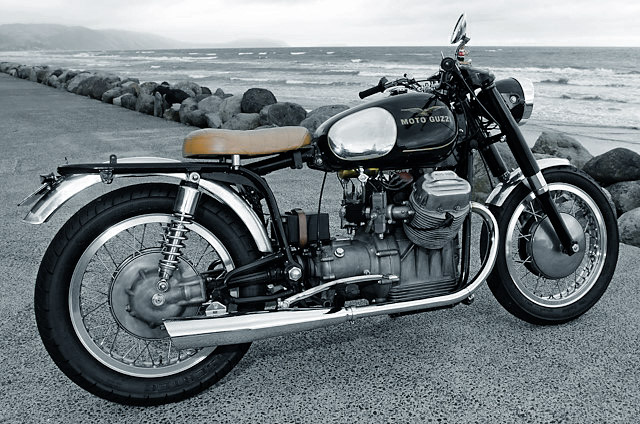 You know what they say. “It’s the simple things in life that are often the best.” And nothing represents that more perfectly than today’s bike. It’s a beautifully simple, perfectly restrained Moto Guzzi from the land of the long white cloud, New Zealand. With not much more than a new seat and a perfect eye for clean lines, Michael Dobson from Raumati’s Two Cats Garage has helped this rather maximal Italian beast shed more than a few pounds and become the svelte, beautiful bike she somehow always should have been. “It’s a 1970 Moto Guzzi V7 Special, which was also called and Ambassador in US,” notes Mike. It’s actually our second Pipeburn appearance – we were luck enough to be featured previously for our 1986 BMW R80RT we called ‘Bopper’. For this one Gary, the bike’s owner, came to us with the concept and we did the rest.” “Essentially, it’s a very simple update on a very bulky bike. Sure, it’s not radically and could easily be achieved at home… but that’s what we like about it. Half the work was already done by Moto Guzzi; it just goes to show that if you start with a good product you just have to reveal it. We were also amazed at just how much lighter the bike looks. Like chalk and cheese.” “The main parts of the build include new alloy guards, the removal of the side covers, a new gel battery which we installed lying down and some subtle pod air filters. The crash bars were removed, a set of lower handlebars were added and an LED tail light was attached. Oh, and a clean, single seat. Obviously.

Then there’s the 70’s Ural peaked headlight rim which gives that classic, forward attitude to the bike’s looks. The custom mufflers were made by Damon at Cycleworks. The battery’s leather belt picks up on the leather seat and the gold tank pinstripe as well. Overall, the look is the proven formula of black and chrome. There’s a good reason why it’s classic – and that’s because it looks so damn good.” “And we should probably mention that the bike will be featured at Polished Rockers ride-in bike show at Tuatara Brewery on this coming Sunday, March 9th. Be sure and say ‘hi’ if you drop by.”