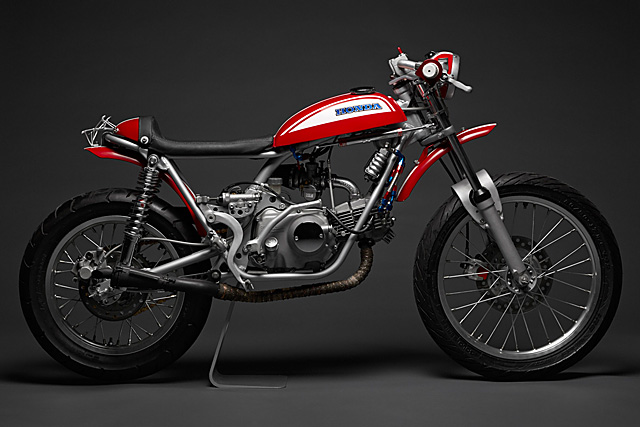 When you’ve been in the custom bike game as long as we have, you get pretty darn quick at spotting bikes that make the grade. Like some crazed laboratory chimp, we get shown a whole heap of bikes on a daily basis and we often have to make a call as to whether we’d show them or not in a matter of minutes. And ‘show’ is exactly what we agreed to do for this bike. In 2011. Then one thing led to another. Photoshoots were booked. Photos were taken. Photos were lost. Grass grew. The world turned. Then, last week, we received the finished product. In the end, we shrugged our shoulders and said the same thing we say about our love lives. “Better late than never”.

“Sometimes things fall through the cracks,” said Davmomoto’s head honcho, David Morales. “Or in this case, a time-warped black hole”. Long story short, it seems that the photos were traded for a customised synth (Hey! I’ve got a great idea for another blog…) Well, the synth hit a supply roadblock and everything got delayed until now. So without any further synth-related ado… The bike was picked up in a place called Midlothian, Texas – hence the “Midlothian Racer” nickname signed to her by the shop. “She was pretty badly abused, very rusted, but a mostly complete bike,” says Dave. Clearing the bike’s dead wood, Dave removed the tank, seat, handlebars and fenders. Then the front triple tree was widened by 6mm to allow for some ‘01 Honda CR80 wheelsets to be utilised. To match, the rear wheel from the same bike was also added. Then almost every bracket was removed or relocated; these included the aft-mounted footpegs, a lowered exhaust bracket, and the keyswitch mount. And if you look closely, you’ll note the latch created to hold the right-hand footpeg clear of the kickstarter. The rear frame was shortened about 60mm and a crossmember between the ‘up-tubes’ was made to brace the rear brake foot bracket which, along with the footpads, were also taken from a CR80. “See if you recognize the centre stand,” says David with a wry smile. “It’s a re-purposed piece.” Yes, yes… but can it run PhotoShop CC? “I tried to simplify the controls as much as possible. A single toggle kill switch is right at the centre and the lights are on a knob mounted in the space where the wires usually come into the light housing. The housing was then turned upside down and the hole that the owner’s manual calls “the useless hole” is suddenly useful to pass the wires through.” Also note the handmade aluminum oil vapor tank (above the cooler in the fourth shot from the top) and the associated oil cooler lines. “Keeping the original cases, we built a 110cc power plant, a 4-speed tranny and then we added manual clutch for good measure.” Despite their best intentions, the bike’s original tank made the grade. It was saved from it’s J-B Weld fate via a long Sawzall blade that was used to cut a masking tape line around the tank’s rusted nether regions. Then the inner mounting tabs were remade and relocated higher up on the tank and frame. The rear hump hides a sealed battery and if you had a sneak peek up under the tank, you’d see that Dave is using the original mounting brackets. “The stock coil went up under the frame tube beneath the tank, but I ground down the mounts, welded and tapped the holes near the frame, and then made a triangular bracket out of aluminum to attach the steering stabilizer.” For a final hurrah, Dave had the original head ported and then proceeded to drop a sweet little performance cam into it. We’re not sure about you, but we can’t think of anything cooler than this little 110cc donk going full blast. “It’s enough to keep you smiling for ages” Dave notes. We bet it is. See you in another five years!