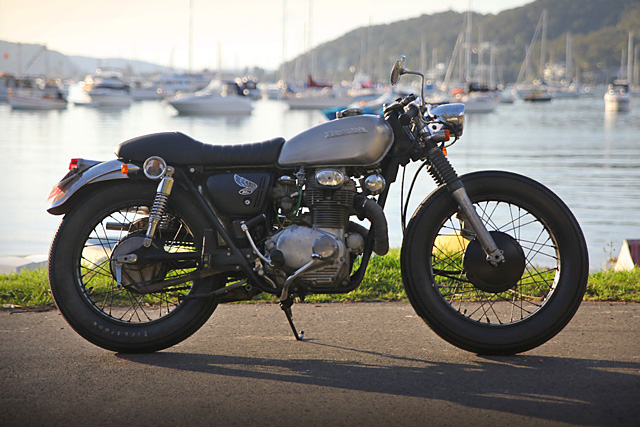 The custom bike scene, like any other art form, often finds itself bending to the will of fashion. But there’s no shame in that – music, painting, dance and almost any other genre you care to name have to endure the same challenge. And while in the heat of the moment a certain trend can seem to the viewer to be very ‘cool’ or ‘exciting’, it’s often only a matter of time before the truth becomes apparent. That’s when cool becomes lame, exciting becomes humorous and your wardrobe full of flared trousers becomes an embarrassment. But what happens when time doesn’t weary? When something improves with age? Well, that’s when timeless happens. Classic happens. This happens. Christian Laws, today’s owner and builder, got into riding a little over a year ago when he bought himself a nice ‘74 Honda CB550. The original plan was to make a few custom improvements to the bike but, like some kind of divine intervention from above, everyone kept telling the poor guy that he should keep it stock. The reason? “It was in absolute mint condition,’ says Christian. “I couldn’t bring myself to do it.”

The answer was simple – buy another bike (isn’t that always the answer?) “So I purchased the bike you see here, a CL350, as a project bike. It was rusty and cheap, but I could instantly see the potential.” What drew Christian to the CL350 was its timeless style and its raw simplicity. As anyone who’s ever ridden one will tell you, the bike has only what it needs to run and nothing more. Naturally, this lends itself well to café racer-style tweaks “It also makes it a good choice for a first time build.” Of course, the stand-out feature of Honda’s original bike was those big, beautiful exhausts. “I think the vintage pipes make the bike what it is and they really inspired the tone of my project. I always thought it was a crying shame that the mufflers on the other CL builds I liked had been replaced with louder but less interesting mufflers. The original pipes add so much character, it’s a real shame to lose them.” After the pipes, Christian lists the headlamp as his next biggest source of pride. “I really love the 1960s CEV headlamp with the built-in speedometer and vintage Italian glass. It created all sorts of grief during installation, but I think it was well worth it. I also like the longer look it gives to the bike.” Naturally, the build wasn’t without its challenges. One of the biggest issues uncovered was that the bike’s frame and forks were bent. And in multiple places, to boot. But the guys at Sydney’s Surfside Garage straightened the issue out, literally. “Because this is such a small machine, my vision for the build was to give it a larger appearance with a strong focus on beautiful lines and a clean, classic look which I like to think I have achieved. The intention was to enhance and improve the original features and let form guide the build rather than performance.” “It’s a fun motorcycle to ride because it’s just so light and it always seems eager to go faster. I also seem to feel a lot more connected to the road with a small bike like this as there is not much machine between me and the ground. Basically, I just love riding it.” Beautiful stuff, no? It’s also interesting to note that when we cast our mind back to some of our all-time favourite posts, many of them have been CLs. Most notable, the work of Jonathan Wood. If you like what you see here and you’re hungry for a little more, you can take a look here and here. Enjoy.