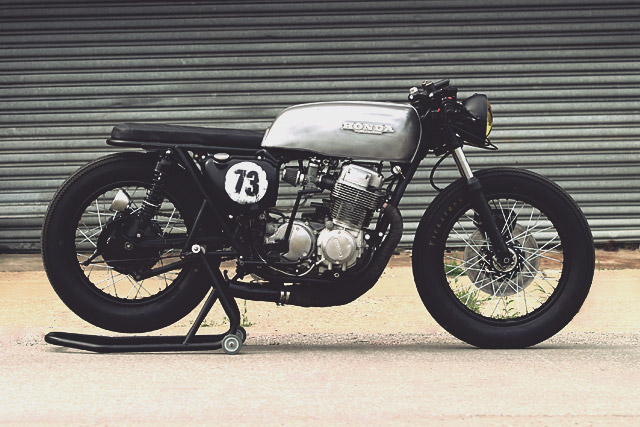 “I had to cut the tree down that was growing through the old bike I found.” It reads like some kind of urban legend or biking folk law, right up there with the story of the guy who wheelied all the way home after he punctured the front. That and the one about loud pipes saving lives… but we’re here to tell you that sometimes the truth is stranger than fiction. And the guy with the saw? Introducing Wes York from Indianapolis, Indiana and his rather sawdusty Honda CB750 brat. “Two years ago I found a ‘73 CB750 and a ‘74 CB550 that had been rotting away in a field in Illinois for over 20 years. I had to cut down a tree growing through the wheel to remove the bikes (yes, seriously) but after we got them out I discovered the 750’s motor was free.” Wes says that he’s always had an appreciation for the industrial age and it’s relics because of their raw, mechanical, do-it-yourself feel. To him, a vehicle is best appreciated when it is stripped down to its purest form, without any fancy paint jobs or flashy chrome. Or leaves, we guess. “To achieve this raw, mechanical look I started with a new frame and cut off just about every extra tab and the rear section of the frame to weld in the new hoop. I machined the top triple flat, installed clip-on bars and replaced the gauges with a GPS unit to make the highest point of the bike the fork tops.” Wes then obtained an original Ford Model A tail light and converted it over to 12 volt to make it usable. He also managed to get his hands on a 1978 Super Sport tank and decided to sand it and the motor down to give them a brushed metal look. The wheels were blasted, powder coated, re-laced with new spokes and wrapped in vintage Firestone tires to complement the retro/industrial look. “The bike had an original 4-into-1 Kerker header that I wrapped in exhaust wrap and left as an open pipe. I made a custom flat seat with diamond stitching to try to distance my look from the traditional cafe tail section that I feel is a little over used now-a-days. In the end, I couldn’t be more happy with the outcome of the bike and I look forward to starting the next project. It means a lot to me to bring a motorcycle like this back to life that was certain to rust away and die.” Wes also took the time to say a huge thanks to his family and friends for their help. He also wanted us to mention his wife for her complete support in his ‘sometimes frustrating but satisfying hobby.’ Awe, shucks, Wes.