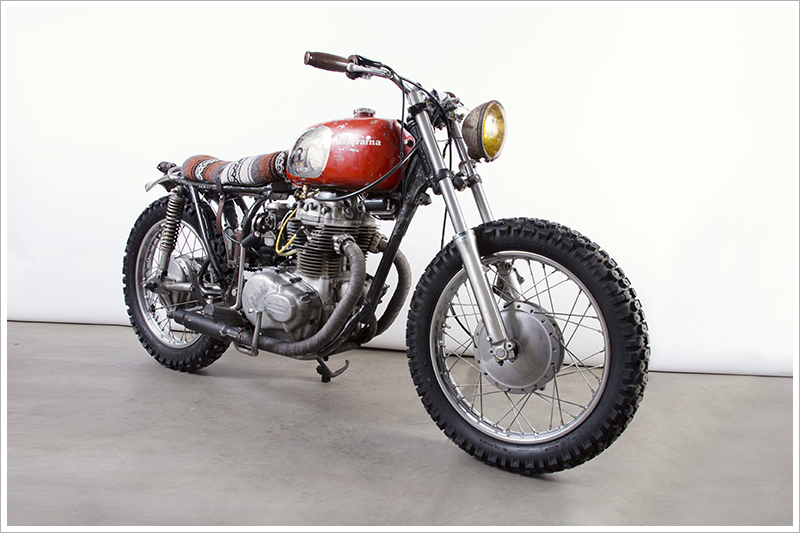 By all appearances Erik Harland Ludwig of Denver, Colorado, is living a fair approximation of the Man Dream. The 26-year old lives in his shop, ‘Machine Shed’, just him, no women (not permanently, anyway), no potpourri or cotton tips, just tools and grease and auto parts. By night he manages Meadowlark, quite possibly Denver’s smoothest bar, and by day he strips back and builds up, fabricates and assembles. Motorbikes or cars, it doesn’t matter, he loves both. No big surprise then that tearing out of this vortex of gritty cool is this raffish dirt rat, affectionately known as ‘Cowboy’. The base? A ’75 CB360T. ‘Bought stock and nowhere near running,’ says Erik. The motor was stripped and rebuilt, getting new hardened internals in the process. The carbys, too, rebuilt and re-jetted. The frame was detabbed and the sub-frame shortened, and gained a rear hoop of Erik’s making. The tank is from a ’72 Husky 400 Cross, and demanded some top tube mods for the right fit. Like many rat builds, the provenance of some parts are known—‘I made the tail light from random rusty metal bits and shaped the lens from the stock tail light’—while others, not so much—‘I think the headlight is an old rusty fog light bucket for a car.’ And what about that seat? ‘It’s a rolled up Mexican blanket that was lying around the shop, held on by my grandfather’s old broken belt. I use the blanket when I go camping up in the mountains.’ Erik did all the work himself, even mounting the tyres. (‘A pain in the ass,’ he recalls.) Custom fabrications include the metal electronics box under the seat, the starter unit and kill switch on the bars, and a simplified wiring harness. The rear fender was taken from a ‘78 CX500, cut short and kick-up to a ducktail. ‘It’s insanely fun to ride,’ Erik says. ‘Especially in the dirt.’ We don’t question that at all—we just hope that blanket stays in place over the bumps! Not surprisingly Erik is now getting requests for commissioned builds. It wouldn’t surprise us if he got a request or two for a life swap either.