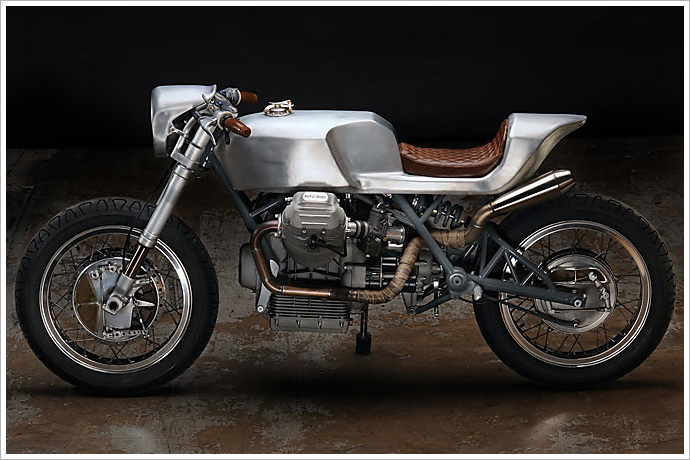 Imagine, if you will, a manufactured object that represents the perfect mix of Japanese and Italian culture. What do you think that would look like? As an obvious starting point, both nations are formidable engineers and industrial designers, so you’d have to expect something that was built to within an inch of it’s life. Both countries are totally and utterly obsessed with food, so you’d assume that the object would show a love for the finer things in life. And both have a high appreciation of aesthetics, so you’d think the thing would look a million dollars. No coincidence, then, that today’s bike is exactly that; a killer Italianese mash-up that takes the best from both it’s parents. Meet Revival’s ‘75 850T Yama-Guzuki named ‘Beto’. “This is a 1975 850t chosen specifically because it was the only Guzzi that came with the twin-leading rear drum brake” says Alan Stulberg, Revival’s chief resucitator. “This made it the least desirable 850 model at the time it was made, but the best for the Guzzi parts stash I had in the shop to build what is ostensibly my personal dream bike; specifically the authentic OEM Yamaha TZ front dual twin-leading shoe or four-leading shoe drum brake that I’d been dying to put on something a little different. The brake inspired the entire build.” “A long-time friend who is loyal to Revival commissioned the build and trusted our hair-brained scheme with the drum brake,so off we went. We found a donor 850T in Tennessee that was in pieces, but with a title. We immediately decided to add an inverted 2007 Suzuki GSXR front fork set-up to the drum brake, fully knowing this illogical combination would be ludicrous to most, but utterly simple in its intention to combine the best brake of the period this bike was made during and some of the finest suspension technology of modern machines. This challenge alone was a complicated one. Using the factory Suzuki large-diameter front axle was a problem that required us to machine the factory Yamaha hub to fit and sourcing of super thin diameter bearings to accommodate it all safely.” “We then heavily gusseted the frame, removed the lower frame rail, gusseted the rear swingarm and added an Ohlins rear shock and spring. Then we completed shaved and cut open the rear Guzzi twin-leading drum to match the front TZ drum.

We then decided that a handmade one-off integrated unibody alloy tank, seat and tail would lead the style cues and the rest just sort of followed from there. The aluminum handmade pieces are all over this bike and include the headlight cowl, the headlight brackets, front brake linkage, footpegs, shifter, brake pedal, intake manifolds and exhaust. They were all hand-formed from scratch and machined in-house using our equipment. So much love went into this bike and it’s been great to be able to say that only the powder-coating and leather seat was made elsewhere, the rest is all us. “This bike was not only build to look good, it was built to perform. We recently took it to Jay Leno’s Garage and after Jay rode it he exclaimed that it was by far the best handling and road-going Guzzi he’d ever ridden. It stops on a dime and it carves corners with the best of them. It’s been ridden over a thousand miles now and it’s ready for many more.

Here’s a not-so-simple list of mods that we can remember for the 850t. As mentioned there’s the Yamaha TZ racing 4LS front brake and the Inverted GSXR Forks. There’s some fully custom one-off CNC triples. POSH grips, widened hubs and Custom 18″ alloy wheels. There’s an LED alloy headlight with hand-formed headlight fairing and brackets. We’ve also got a Motogadget M-unit and M-lock which replacing all relays and fuses, one-off gullwing style alloy clip-ons, an integrated gas tank, seat and tail and a dropped & lower frame rail.” “There’s one-off pegs, shifter and braking system, a one-off stainless exhaust with CNC-machined header clamps, and (you guessed it) a one-off CNC-machined cut alloy frame tie-plate. All cables and the wiring was handmade and there’s a hidden LED taillight system. We also polished and smoothed everything. Oh, and the handmade seat by Ginger at New Church Moto.”