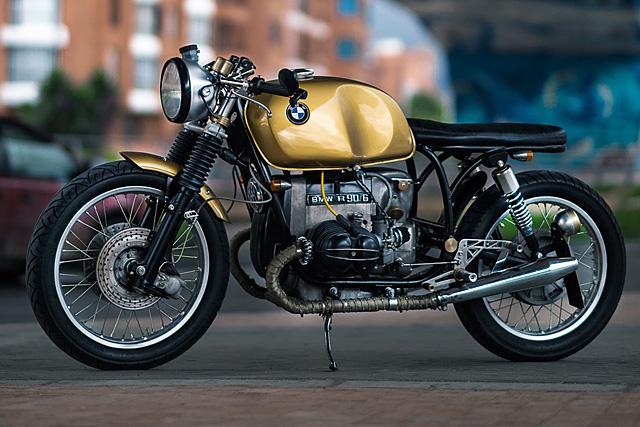 After five long years in the motorcycle blogging game, we’d like to think that there’s pretty much nothing we haven’t done. Electric bikes? Been there. Drag racing? Done that. Borrow a new bike from a large Japanese manufacturer and then total it? Um, we totally have no idea what you are talking about… But after all those shenanigans, there’s still one thing that we’ve never done, and that’s feature a build from Colombia. Until now. Here’s an amazing BMW from Bogotá’s brothers Esteban and Gustavo Pasquale and their shop, Garaje 57. The boys describe themselves as “a little shop in Colombia that makes bikes with their heart. We stared out making the fastest Vespas in the country, and now we’ve taken things to the next level. This bike is out latest build, a BMW R90/6 from 1976. We made this bike for a very great friend, and he gave to us complete artistic autonomy.” Their brief to themselves was simple. “We wanted the finished bike to look like it could have left the BMW factory with this exact shape. There had to be a coolness about it, but nothing that gave the game away for those who weren’t in the know.”

To get things moving, they decided to rebuild the motor for reliability and for added oomph, so they changed the original Bing carbs for a set of Dellorto 38mm PHM BS units – a carb much more popular with 90s BMW models than with bike of this generation. Then, wanting to ensure their new lump was held a suitable distance from that big ol’ cheese grater we call the road, they added a set of classic-but-new Hagons at the rear. “This bike has a lot of parts that we made ourselves with our old drilling machine and lathe. Specifically, we’re quite proud of the rearsets that were made in 7075 Prodax aluminium; we wanted this part to look great with its triangular design and also to be able to handle the weight of two adults.” Next up was a Motogadget speedo, which they promptly rehoused in a suitable brass house. “Actually, we included a lot of parts in brass – mostly because our work has a strong influence from the steampunk movement.” It’s not alway an easy feat, but get the brass and chrome balance right in any steampunk build and you’ll be sitting pretty. Needless to say, we think the brothers nailed it. “We wanted the lines of the new subframe to look smooth and to mix well with the lines of the original. We took that same attitude with the rear fender that we made on our English wheel. We also modified the triple tree and lowered the front suspension because we wanted the stance to look meaner and more sporty.” They made the headlight clamps with solid pieces of brass, and while they were at it they also machined up a new taillight from aluminium and put some LED bulbs inside for stopping duties. In a nice touch, it also supports the license plate as a holder.

“For the electricals, we rewired the bike from top to bottom, and we used a Ballistic battery for the kick. Then we made up a little circuit to manage all of lights, while the ignition system is handled by a Dyna3 electronic ignition box. There’s also Tomaselli Condor Plus handlebars.” “To finish things up, we disassembled the whole bike and used a powdercoat for all the main parts and the frame, too. For the tank, we wanted something that really appealed to the eye, so we ended up with a Dupont gold paint and a clear coat over the top. We hope your readers like looking at it as much as we enjoyed making it. ”