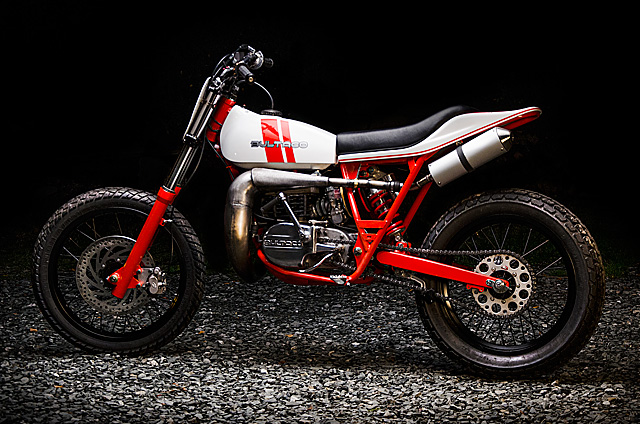 In the modern custom motorcycle scene, the name Bultaco is probably best known for its logo that often adorns many a T-shirt. But the company’s real success is its domination of dirt racing from the very founding of the company, when the lightweight Spanish 2 strokes took the challenge up to the heavy British 4’s and dominated the Trials world for more than a decade. But this 1976 Bultaco Astro 360, built by Pierre Dehr from France’s Freeride Motos, brings together a variety of Bultaco models components to tell the story of when a small Spanish start-up took on the world, driven by a singular love for racing, and won. Founded in 1958 by Francesc “Paco” Bultó who left Montesa frustrated with their reduced involvement in racing, Bultaco began in a farm shed and launched the first of their bikes less than a year later. Racing success was soon to follow with their brilliant 2-stroke engines and lightweight designs winning dirt racing almost wherever they entered; Bultaco dominated the World Trials Championship in the 1970s, winning the title eight times, while over in America the Pursang model had great success in all forms of off-road racing. But it was from this bike that a truly American Bultaco would emerge to take on Harley Davidson and the might of the King Kenny Roberts lead Yamaha; Named after the grand stadium in Houston which hosted the big Flat Track events the Bultaco Astro was born. With prices for the Astro sky-rocketing and original unmolested examples hard to find, Pierre began his Astro build with a 1967 Matador 250 MK 3 frame. The metal was cleaned up, braced and reworked to take the bigger engine that was to follow. A new aluminium monoshock swingarm from a Gas Gas was fitted and the subframe relieved of its twin shock mounts before the whole thing was coated in a heavily orange tinted red. The tank is beautiful, an authentic 1976 Astro unit, while the famous seat design is a reproduction item made in-house at Freeride. The brilliant paint work was laid down by Pierre himself in the famous white and orange colours with the Bultaco logo and graphics added to the tank but the black graphics of the original left off for a cleaner look. There is the signature front fibreglass race plate and a small “370” logo that suggests this Astro is packing something a little different in the engine department. A good 2-stroke engine is an angry beast at the best of times, ready to rev in an instant, a narrow powerband that seemingly comes from nowhere and then gets brutal like a smack around the head, with a scream that’ll give you chills. The Bultaco 2-strokes were all that and more with the original Astro being based on the Pursang Motocross model, but with more power for the wide open flat tracks, showing the companies impressive ability to fine tune their 2-stroke engines to meet an exact racing requirement. For this build Pierre opted for the 363cc engine from a Frontera 370 Mk 11, one of the companies successful enduro models. Although of almost identical capacity the Frontera is a slightly longer stroke engine, less peaky (less power) than the original Astro but more versatile. Pierre has completely rebuilt the engine inside and out, taking care of the internals with an array of new components and gaskets. The standard Bing carb is gone and fuelling is now taken care of by the far easier to tune Mikuni VM36 that also makes throttle control that little bit easier. A flat slide would just be asking for trouble on a bike designed to be used in various forms, but around 50hp has been achieved with big breathing FS carbs. Combined with modern electronic ignition torque is up and starting is far more reliable, the more controlled spark also helps dramatically improve the way the power is delivered through the rev range. The exhaust utilises the original Frontera expansion chamber but is finished off with a more modern KTM 125 slip-on. Such a brilliant engine deserves to look its best and Pierre has polished the side covers brilliantly, added new fuel lines and fitted up a new filter to the carb so the air, fuel and oil don’t end up a dusty mix! To the uninitiated, Flat Tracking a bike is just holding the throttle open and sliding around corners. What does the suspension matter, right? Well, quite a lot. This is evidenced by the big money forks used on modern-day machinery, but even in the ’70s Bultaco used their sales brochures to emphasise the dampening abilities of their telescopic front forks. But to bring this slider into the 21st century the front end is now 40mm Marzocchi items running Kayaba 01M oil. Out back the new swingarm supports and fully adjustable Yamaha R6 Showa shock that allows the bike to be dialled in for a variety of conditions. A Flat Track bike is normally evident by the absence of a front brake, but wanting to be able to ride more than one style Pierre has fitted the bike with a 320mm front rotor from BMW, with the rest of the front braking system being AJP from an enduro Gas Gas. The rear brake is a standard trial Gas Gas unit, just make sure that’s the only one you use on the big track or it’ll be dirt for your dinner. Rolling stock is of course of the spoked variety with the front wheel coming from a BMW F650 and the back from a Gas Gas. The tyres are Pirelli’s Scorpion on the front and a Dunlop K 180 for the rear that allow Pierre to ride the bike hard on a mix of off-road terrains. To set the bike up to his particular stance and riding style the front bars are Domino 28.6mm units with custom aluminium footpegs giving the perfect ergonomics for some knee down, sideways slides. Having done all the work at his Freeride workshop Pierre intends on racing the bike at Dirty Sunday, a Dirt Track competition in Eauze, France. But having built such a brilliant machine he’s also made it versatile enough to be able to take it out most weekends. Because for all the glamour of a big dollar, high-tech sportsbike, nothing quite calls your name like a vintage 2-stroke flat tracker, ready to thrill you, spill you and make you scream.