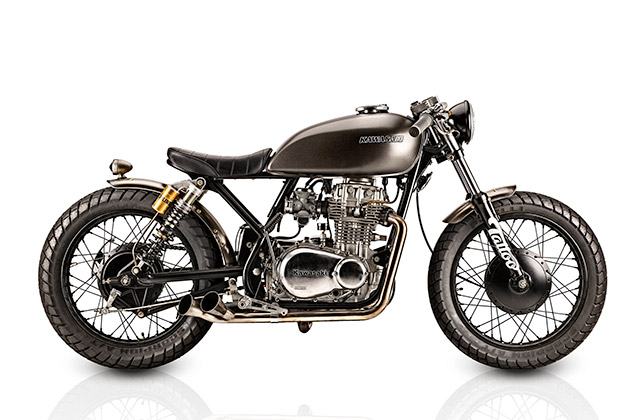 Some of us dream of throwing in the towel on our day jobs to do what we truly love. Whether it’s building custom bikes, opening a café or just taking more time to focus on your family, it’s a fantasy that’s as common as slap bass in Seinfeld. But as with most things inline, there’s another option to consider. What if, instead of leaving one job for another, you just combined your passions and did both? Sounds impossible, right? Well don’t tell that to North Carolina’s Tattoo Projects, who are currently a successful advertising agency and a custom bike shop. It might seem crazy, but when you consider that they count Victory Motorcycles amongst their clients, you can kind of see the logic of it all. And what have they been up to when they weren’t standing around with whiskey and cigarettes Don Draper-ing? This is what. We’ll let Rudy Banny – Tattoo’s Founder and Creative Director – kick things off. “Born from the Tattoo Projects Ad Agency, Tattoo Motorcycles applies the same principles of creativity to customs as we do to making ads for our clients.” On any given day at Tattoo, bikes are being made right alongside tv spots, print ads, and package designs. The Tattoo team suggests that this kind of creative influence produces bikes with an unusual and memorable style… and hopefully some decent bike ads, too. “There’s a few things that characterise a Tattoo bike. A lower stance. A stretched swing arm. A better-proportioned profile. Fatter, gnarlier tires. Powder coating. An exhaust sound you can feel. Great seats. We do whatever it takes to bring out the soul of the bike,” says Rudy. This build was a joint venture with their mates at 2topia Cycles. They agreed to do a steam punk-influenced design on the Kawasaki and things were kicked off with the removal of the bulky rear end and the modifying the sub frame to provide a cool, solid foundation to build on. “We went the solo seat route and attached some clip-ons, rear sets and Ohlins shocks. She was really starting to take shape. We had a custom triple-tree machined by Stephen from Toaster Tan, we powder coated the wheels and we strapped on some gnarly Pirelli Scorpions.” That’s right about when the boys recruited the help of Nate Hamlin and Bob Iwankow of 2topia to do their magic on that damn, pesky wiring. Nate and Bob hooked the KZ up with a complete rewire and buried most of it in the frame while they were at it. Seeing the rather impressive results, it stood to reason that they fit the bike with some slick Motogadget components. And to wrap things up, they broke out their deft fabrication moves to build some bespoke custom fenders and an exhaust set-up. We’re not sure about you, but we’re really liking the twin trumpet look they’ve achieved.

If you like what you see, then be sure to check their stunning 1970 BSA Lightning we featured back in 2013. Eighteen months later and it still manages to bring a smile to our faces and an itch to our throttle hands. Nice, huh?