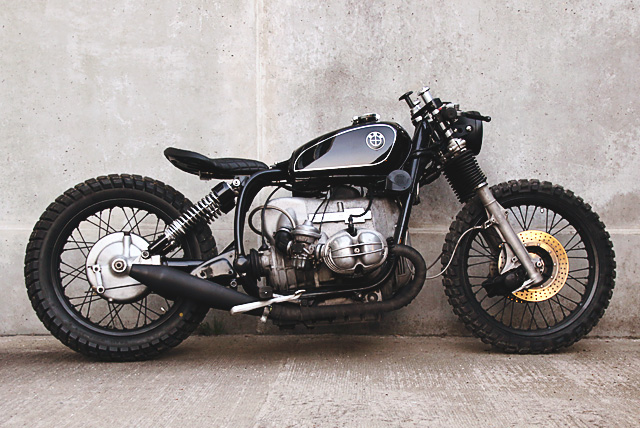 Ah, Denmark! A beautiful nation with friendly folk who have given the world such gifts as Lego, the Pastry and the Vikings. Have fun, eat well and die! Maybe the lads from Relic Motorcycles eat pastries for their breakfast, of that I can’t be sure, but when it comes to building things from pieces and murdering them out, they never let their heritage down! Based in Aarhus, Denmark the team of builders are forging a reputation for creating low and lean machines with a dark attitude. In steel we trust is their motto and there’s no plastic here, just the best old school bikes infused with a new beating black heart. When it came time for team member Kristian Bech to build himself a new ride he’d always “liked and admired the look, performance and history of these old boxer twins” so why not go straight for the top, take one legendary 1977 BMW R100S and give it a full Relic Motorcycles make over. Having ridden a Yamaha XS11 for sometime now it was time to step onto a new beast and with fellow Relic, Jonas, also building a BMW R it was time to create a pair of siblings. “I like my bikes looking old school; Stripped down to the bone with nothing but a clean machine to ride on. The idea was to build a low-stanced bike that could sit somewhere between a cafe racer and a bobber, and would be comfortable to ride.” It’s not often someone can get any BMW to come close to resembling a bobber but Kristian nails it with the first modification coming straight from left field. The standard tank is gone and in its place is a Honda item from a CL360. Its teardrop styling instantly gives the visual appeal and a lot of time was spent ensuring it sat just right! “The tanks lines follow the lines of the rest of the bike and engine and I positioned the headlight low and close to the forks to really connect it to the small tank.” [superquote]“The hardest part of any build, I think, is getting the lines right. I always try to get a few visual lines running through the bike.”[/superquote]

Painted just in gloss black it would have looked great but with the addition of silver pin-stripping, a chrome filler cap and classic BMW logo it takes retro cool to a whole new level. With the frame completely de-tabbed cleaned up and painted the entire rear subframe was also removed and it wasn’t going to be coming back. Instead the main frame is extended just far enough back to support the Biltwell Diamond Stitched Harley solo seat that completes the bobber half of the equation. Again just like the tank it wasn’t a matter of simply slapping it on and hoping for the best but ensuring that each item complemented the other. After jokes about applying pipe wrap Kristian confessed to the aspect of a build he spends the greatest amount of time and attention on.“The hardest part of any build, I think, is getting the lines right. I always try to get a few visual lines running through the bike.” Getting the bike down in the weeds was one of the vital design aspects of the build and matches the low to the ground stance of its Relic Motorcycles sister BMW. To get the process under way a minimalist upper triple tree was cut on a CNC machine that does away with the old BMW lump. The front forks were then drastically lowered through the trees exposing more than a few inches of the stanchions out the top. It creates a mean look whichever way you approach the bike and with no front guard and just a set of gators going lean takes on a whole new attitude. If the front’s wild the rear is equally as crazy and makes for one bad ass back-end; with the subframe gone XL 420mm trail Hagon Shocks now bolt to mounts on the main frames hoop and you start to wonder if this BMW has been placed in a torture rack! Looking the part the big BMW has been completely rewired with many of the accessories the tourer had fitted now no longer wanted nor needed allowing for a neat look throughout. To power the system a new lightweight and powerful JMT lithium battery is hidden behind the engine block. With all the wiring tucked away the headlight no longer needs to house a birds nest so taking its place is a much smaller retro item with an LED tailight tucked up under the seat. The long and low look of the bike is further aided by having no instrument cluster poking up in the way but instead side mounting an old BMW analogue speedo as the sole provider of information. A pair of custom-made clip-ons are another element of Kristian’s commitment to the lines of his builds being spot on and keep the throttle, switchblocks and master cylinder below the line of the highest point of the bike. Powering this Relic is the 100R’s legendary 980cc Boxer twin with enough ponies and the right gearing that allowed the old sports tourer to not only hit the ton but cruise at that speed comfortably. With such an engine in place a raft of performance modifications for a street bike aren’t necessary but polishing the block back to a nice shine creates a beautiful contrast to the black body work and is further accentuated with black barrels and polished valve covers. New braided fuel lines insulate the go juice from the airheads heat and feed the big 40mm Bing carbs that draw their air through the original metal airbox. The exhaust is all business with pipe wrapped headers keeping the heat from the airheads and twin black mufflers giving the thumping twin the sound it truly deserves.

You can’t ride a bike that won’t roll and the wheel/tyre combo will surely get people talking. Mounted up to sanded hubs are powder coated spoked rims, another distinction from the other Relic Boxer. But it’s the tyres that do the talking, the heavily treaded Bridgestone TW42 120/90 rear and Michelin Anakee Wild 120/70 front give a buzzsaw effect when rolling down the Danish roads. That Relic Motorcycles does so in a pack of old school cool, hand crafted, steel shaped and murdered out machines is proof positive you don’t have to ride a heavy Harley’s to dominate the mean streets. It’s not only Kristian’s personal bike that he loves to ride, that’s half the goal, it’s also a rolling display of what the Aarhus based workshop can produce. So if it should happen to get you talking then consider it job done and done!