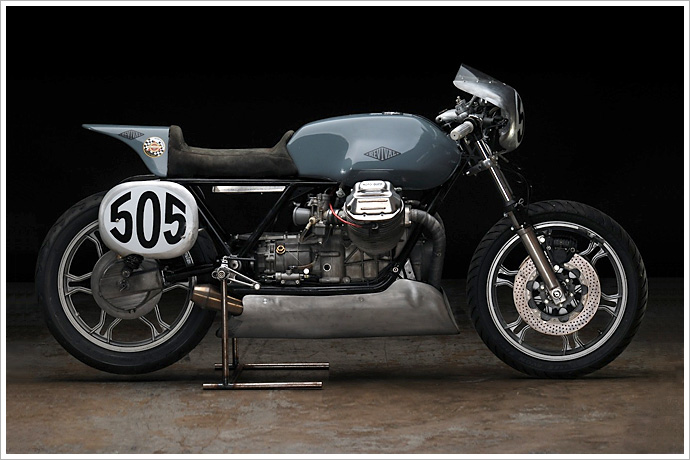 It’s hard to deny that Moto Guzzi hold a rather special place in the pantheon of motorcycles. They’re a whole lot cooler and unusual than your average Ducati. They’re definitely more passionate than most BMWs. And there’s little doubt that they can out-sport most Triumphs, even if it is by their looks alone. In what you could call a Lamborghini-esque niche, they seem to occupy that perfect world where collectable, beautiful and unusual intersect. Which makes a custom Guzzi even more of an impressive proposition. And when they’re done as well as the bikes that have been rolling out Austin’s Revival Cycles in recent years, it’s a wonder that the other shops haven’t given up and gone home. Meet their latest and quite probably their greatest, the ‘78 Le Mans Special. “I bought this bike as someone’s unfinished factory restoration project,” says Revival Cycle’s main resuscitator, Alan Stulberg. “He literally kissed it and bid it farewell when I handed him the cash. It was sort of emotional, but in reality it came to me with everything zip-tied on it to make it look as if it were a functioning bike. It was simply a rolling parts rack with everything finger-tight and I seriously had it back apart in less than an hour.” “Not many Guzzi lovers come across a factory-clean Le Mans I for a decent price and the purists would be screaming, but I simply couldn’t resist the urge to rip it down and turn it into the custom Le Mans I’d always wanted. After coming up with some basic design parameters, I started de-tabbing and cutting the frame down. We then built a custom aluminum tail and seat pan, a black suede seat with red stitching on the outside edge with a chevron pattern and a hidden RFID sensor under a Revival “R” logo to act as a keyless ignition switch.” “We cut down and custom-fitted a set of Tarozzi rearsets and relocated the rear master to further clean up the rear ‘triangle’ section. We deleted the center stand, built a custom stainless 2-1 exhaust with a CONE Engineering silencer (the sound is the most amazing Italian goodness I’ve ever heard). We serviced the engine, verified fantastic compression and installed a new DYNA electronic ignition. It all started up on the first try. The Lithium Iron battery buried under the seat is tiny but cranks things up beautifully.” “The vintage Marzocchi rear shocks were a cool find that simply had to go on this bike. They are upside down because they wouldn’t fit with the factory rear brake caliper, but I strangely prefer them this way. They were revalved and work surprisingly well.

I picked the flat-toned grey color because it resembled the Porsche 356 color that I’ve loved for years. I don’t think most people would paint aluminum. The tail was smooth and ready for polishing, but I decided this color was more what I was after. After that, it was all about the subtle details – the POSH grips, the leather inlay on the tank filler inset, the one-off hand cut leather ‘zip-ties’, the choice to keep the otherwise not-so-subtle Guzzi badge that is made subtle with black paint and maintained to show its heritage.” “The bike is an excellent runner and infinitely faster and better handling than my old T3. It’s a veritable rocket by comparison; she’s a total blast to ride. But not being ones who can leave well-enough alone, we decided to race it in the Barber Vintage Festival this year. We started bu building a full set of alloy bodywork, as you can see. We also put in a stronger clutch, a modern Brembo radial master cylinder, stiffer race-tech fork springs, adjustable air cartridges for fork damping, Icon rear shocks and of course Avon track tires.

On race day Chris managed to start in 14th and got a great hole-shot that helped him finish in 5th place. We were all stunned as he passed modern Japanese sport bikes mixed in with the vintage racers to finish with a winner’s fist pump.” “The future of this bike is likely to include us slapping some tiny headlights down low on the forks and simply riding the hell out of it on the street until we can get it back on the track. We have decided that we’ll also be building a more fitting race engine to make sure Chris doesn’t have to settle for 5th place next time.”