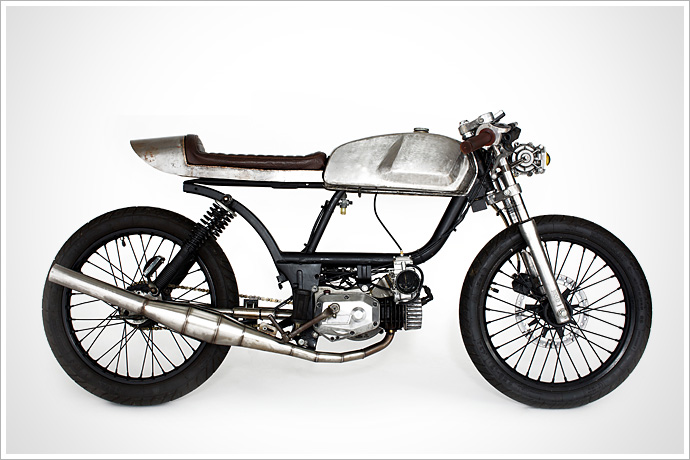 Blood Lust. Bloodless. Cyborg Death. Let’s face it; when it comes to naming his builds, Austin Tremellen from Philly’s Rogue Builds is a guy with some rather gruesome influences. Sure, he builds some of America’s best mopeds, but we’re genuinely worried about him. Then we find out he’s named his latest build ‘The Oracle’. Harmless enough, you’d think. But do a little research and find out that in ancient times, ‘oracles’ were priests that told the future by gutting a bird and reading its entrails. So, the truth is obvious. Poor Austin is clearly possessed. We’re off to find an exorcist; you guys keep yourselves busy by reading on. Here’s Austin. “After starting life on an assemble line in 1979 Taiwan, this General 5 Star moped found its new home in my shop 33 years later. With almost nothing salvageable other than the frame, I decided to embark on a project which would give me the freedom to get creative and to really test some limits.

This wasn’t my first Minarelli build, but this time I wanted to try my hand at making something unique. Something that could ride the line between old and new (in performance and appearance) and had a certain balance between industrial and handcrafted. To make this happen many modifications were needed, as were many hands working together. This build could not have happened without a community of skilled and like-minded builders.” “The process of this build was long and challenging. I think one of the first things I did was swap the original Italian Minarelli v1 engine with its more exotic relative, the v1Lks (a case inducted kickstart version) which I built from the case up. Using a full circle race crank from a v1, I was able to stroke this originally 39mm engine to 42mm. I had the crank balanced and rebuilt by Mr. Crankshaft and the results left me with nothing but praise for Vince and the boys. When rebuilding the engine I decided to go with ceramic hybrid bearings, something unusual for the moped world. I also went for some flat cut gears and a clutch bell fitted with a needle bearing rather than the stock brass bushing as I’ve had both fail on me with a previous build. With such a solid bottom end I knew this was the right build for the big boy BRN 90cc cylinder. After a few days of filing I had a beautifully paired match.” “The stock 12mm intake wasn’t going to cut it; nor was the restrictive 2 petal reed valve. So I looked to Argentina where racing mopeds is serious business. Luckily, a popular choice for racing there is a Minarelli clone called a Zanella v3. Then I decided to increase the size of the intake and reed valve by fabricating a 26mm 4 petal intake and reed block. I got my hands on one of the racing intakes and ran it over to my favourite machine shop in Philly for further modification. After some rather tedious milling, we were able to make an 8 pedal V-Force Banshee block drop right in! I topped it off with Mikuni TM28 carb that I modded into a powerjet for some extra fun.” “The final touch on this build was a headlight I constructed using an early 1970’s French AV7 Motobecan 50cc moped case and a tinted projection lens. I also created the minimal headlight brackets using some shop scraps and the stock piston pin. This headlight was inspired by some interior lighting projects that I started last year using recycled French mopeds parts.” “All the nitty gritty and details of the build aside, I’d have to say my favorite part of the process is always the relationships that develop among the guys involved in its construction. Devin Biek of Janus motorcycles had his hand in this project. Then Ian Hailcott from Twinline Motorcycles jumped in and really took it to a whole other level by adding some beautiful welds and the classy yet comfortable leather tuck and rolled upholstery. Finally, MS&M Machine Shop in Northeast Philadelphia performed numerous machining tasks with surgeon like precision. What’s the saying? ‘It takes a village?’”