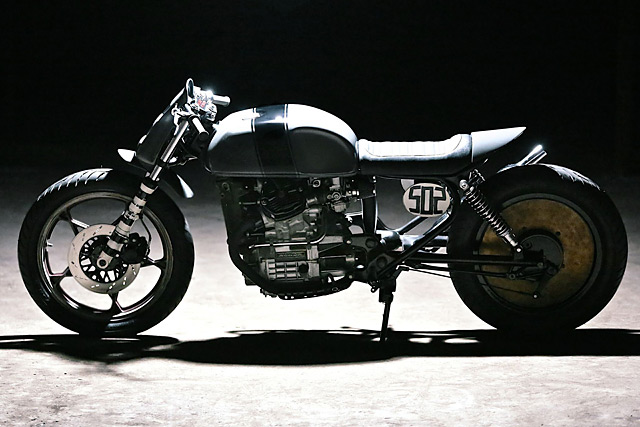 It’s a truism to say that most builders have a kind of love/hate relationship with their project bikes. From the elation experienced when a seat comes together perfectly with a frame to the utter torment of broken bolts, mysterious misfires and parts that magic themselves into other dimensions after they hit the floor, it’s more than common for builds to drag their makers through a gamut of emotions. But I think it’s fair to say that Brad White from Louisville, Kentucky’s 502 Moto has a painful build story that beats most. And when I say painful, I mean just that. The Little Stranger build literally started as an accident. After the 450 lb. 1979 CX500 purchased by sculptor and fabricator Brad White ended up on top of him, fracturing his collarbone but only slightly injuring his ego, he knew things had to change. Even prior to the accident the vintage Honda was in need of everything; brakes, tires, fluids, and just about anything else you could imagine. Following the accident, Brad made his way down the I-71 South, from Columbus to Louisville, Kentucky; a town which is becoming widely recognized for its ever-growing vintage bike scene. Brad, who is known both regionally and nationally for other vintage bike builds, recently teamed up with mechanic and partner Michael Van Benten, to form 502 Moto. Little Stranger is the bike that has launched the look of their fledgling company; a look that was described by one recent observer as “metal as fuck.” The long, low stance is a result of the guys stretching the swing arm four inches back and raking the steering neck to create a more menacing look. By lowering the narrow forks internally, placing a pentagram wheel upfront and inserting bronze Paiste cymbals in the rear. Yes, you read that right. Paiste – as in drums. Little Stranger is equal parts Slayer and Salt Flats record setter.

At first look, what most people notice is the custom deluxe tank, which Brad gently manipulated with a ball pen hammer to create a tasty pair of knee pockets and a trick, recessed fuel filler. To visually balance out the fatty 4.5 gallon tank, the rearmost section of the frame was removed, altered with a hoop, and then new shock mounts and tail section were crafted to create a more aesthetically pleasing look. Digging into their previous chopper builds for some inspiration, the front fairing got some vintage stacked rectangle lights that have been frenched into a manipulated KZ400 fender found lying on a shelf.

Brad’s trademark black and white paint scheme wasn’t left behind, as the front forks got striped “hooker stockings” to match up with the race inspired side covers, painted to mimic last-minute electrical tape number changes seen by Brad and Michael over the years at the local races. The rest of the bike was shot in-house with Audi Nimbus Gray pearl with a “vintage Moto Guzzi” stripe on the tank and cleared in satin to keep it as punk rock as possible. Flames and smoke are kick ass during a rock show, but Michael wanted to make sure that never occurred while on the road with Little Stranger. To achieve this he rewired the entire bike, placing any of the previously visible electronics under a soft-leather seat with the irregular stripe in the stitch, crafted in-house by the boys at 502 Moto. The exhaust system was chopped up and rerouted as a two into one. Bespoke heat shields continue the stripe pattern and it’s finished off with an upswept Triumph muffler, which lines up nicely with all the angles and is quiet like a Honda should be. All up, 502 have created a good-looking, comfortable ride from a barn find that responds well in the corners and goes like hell on the straightaways. And Little Stranger doesn’t look out-of-place in the twisties with clean vintage restos or stretched out along side a chopper or five. Next time you find yourself south of the Mason Dixon line, why not stop by?