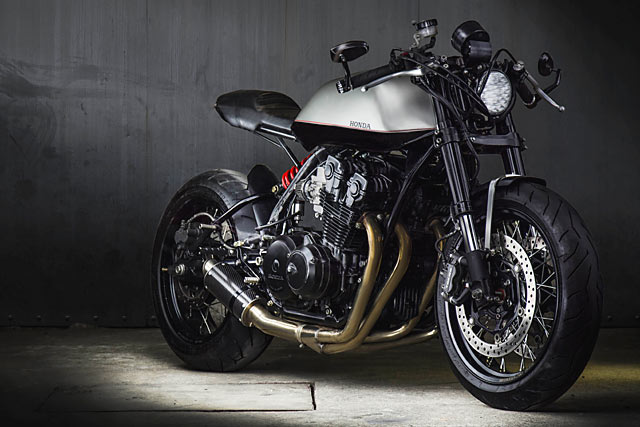 The lumbering, all-consuming beast that is cafe racer culture has stretched its tentacles all over the world. Nowhere is this more apparent than with today’s bike, a 1980 Honda CB750 produced by Ace Custom Shop in Colombia. Built by a small, three-man operation nestled in the hills of Bucaramanga, it’s easily the best thing to come out of Colombia that doesn’t need a credit card and a mirror to enjoy. Ace Custom Shop is only new to the game, having been started by brothers Diego and Juan Sotomonte with their friend and mechanic Andrés Cabralas in 2013. And in the last three years they’ve been extraordinarily busy for such a small firm. They’ve made trackers and cafe racers out of Suzukis, Yamahas and Triumphs – all designed to battle the perilous roads and even more perilous drivers of South America. This time around the team turned their attention to a stable of the bike scene, the classic Honda CB750 cafe racer. Arriving too late for the original wave of cafe racers in England, the CB has become a mainstay for builders in the last ten years, with people appreciating its reliability, smooth power delivery and coke-like (the other type) availability of parts and spares.

But Ace Custom Shop’s CB required more than a little freshen up to get running. With the bike arriving in the shop in pieces, the frame and split cases being only acquaintances in a shared wooden box. Surveying other custom CB’s on the market and the poor quality roads that snake through their city, Ace Custom decided to build a modernised cafe racer that could tackle their local roads with ease.

To that end the suspension was beefed up, with a fork swap at the front and a monoshock conversion at the rear. Both parts come from a late-model Honda CB1000RR, including the monstrous twin discs up the pointy end. The front runs a 17″ hoop and a whopping 17″ 180 rear, giving the visual impression of a bike that definitely hasn’t skipped leg day.

[superquote]“Ace Custom say it’s necessary along their local roads, which are more like a relief map of a spotty sixteen year old’s face”[/superquote]

While such a setup on the old air-cooled Honda is the bike building equivalent of firing a maverick missile at a camel, the guys from Ace Custom say it’s necessary along their local roads, which are more like a relief map of a spotty sixteen year old’s face than any respectable quality tarmac. And the effort was worth it. “Thanks to the suspension upgrades, it handles our roads really well,” Diego says. “It feels a little heavy, but it’s very stable in the turns.” And the engine, which was cleaned, overhauled, fitted with a stubby 4-into-1 exhaust and a new Dynatek ignition, helps the CB haul ass as well.

In classic cafe racer form, everything that wasn’t needed on the bike was removed. Bar ends were fitted, clip-on bars and motogadget bar end indicators help slim everything down and get the bike looking as light and proportionate as a cafe should be. On top of the monoshock rear is a single saddle that has the company’s logo embossed into its black leather. A nice touch, that. As good looking as this racer is, it’s definitely no show bike. And how do we know that? This old Honda is used as a commuter by one of their customers, being ridden through the mountains to a nearby city and back each day. You’ve got to admit, there’s nothing better than a custom moto that’s designed to ride.