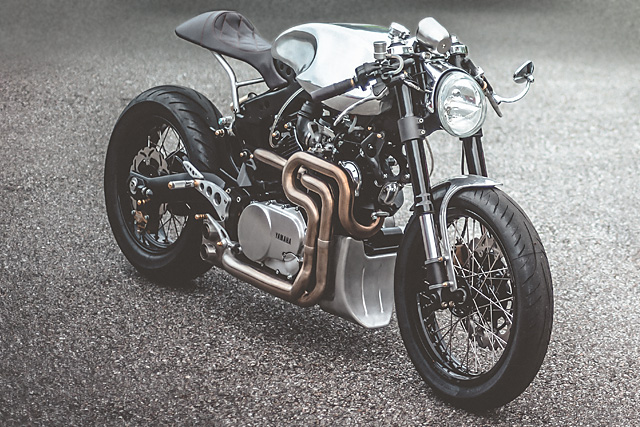 I’ve been on a journey with this bike, not one that allowed me to twist the throttle and tip it into a bend, but a journey of discovery as to what makes ‘Fireball’ tick and how it was put together. It’s a journey that started with a love of the custom tank and over many hours grew to an appreciation of how a once failed attempt by a multi-national to do something new became a one off custom by a lone builder that blows away everything a billion dollar company attempted to achieve. ‘Fireball’ is the creation of Plan B Motorcycles in Northern Italy and described by its owner and sole employee Christian as being a “Neo-Café” workshop that builds one off motorcycles tailored strictly to their owner’s requirements, mixing technology with tradition to improve performance and create Italian like good looks. It is this philosophy that absolutely sums up ‘Fireball’ a 1981 Yamaha XV1000/TR1 that is now a high tech café custom with classic looks and a killer ride. The TR1 was a good idea at the time, create a V-twin sports commuter that catered to those in the US and European markets that still hadn’t bought into the 4 cylinder “fad”. But unlike its cruiser styled big Brother the Virago, the TR1 was a failure for Yamaha and it was soon ditched. But it did have some strong points and Christian has taken great use of them and crafted the rest of the bike from scratch to achieve the desired result. I say crafted, because this build is not a collection of bought pieces, many of the major components are made by hand, hammers, English wheel and blood sweat and tears. The tank is simply a thing of beauty, hammered out from sheets of aluminium it sets the tone of the whole build. The top is curved to create the high point of the build before flowing gently down to either end, the sides are recessed at the back for easy tuck in while extended front halves add extra fuel capacity and give a muscular feel from any angle. Just like the tank the front fender was created by Christian with a hammer and a sheet of aluminium, bashed into shape and then rolled smooth on an ole English, before cutting out and shaping the legs to match. The lightweight aluminium work doesn’t stop there, good thing too as the TR1 starts life at a weighty 220kg, but for purposes of form and function the alloy is cleverly used to create a shortened subframe that supports the hand shaped neoprene seat that is then leather covered. The final aluminium masterpiece is the upper triple tree, crafted from a billet block, it not only looks incredible all polished up, it neatly houses the TR1’s controls. That tree clamps onto the definitely not standard front forks that give a hint as to how serious Christian is about handling. They are a set of black anodized Showa items, 43mm upside down and fully adjustable, held in place at the bottom with a Ducati 916 lower tree. The standard swing arm is ugly and that’s being kind, it also does nothing for the handling, so in its place is a Ducati 999 unit that supports a Showa R1 mono shock. But you can’t simply bolt a modern Ducati item to an early 80’s Yamaha frame, so extensive work was carried out to make it all work together. I highly recommend you checkout the build blog at Plan B motorcycles to gain further appreciation and understanding of how the build was done. One of the big positives of the TR1 is the Yamaha V-twin that has been a staple of many of its more successful models. Its slim profile is something that Christian has honoured and helps improve the handling, the 75 degree and offset layout drastically improves cooling and unlike most big bore V-Twins it revs and does it smoothly. To gain some more power a custom made full stainless steel exhaust system was meticulously put together with a modified “Q-D ex-box ” silencer maintaining the slimline profile. With the weight now down a whopping 60kg and the suspension sorted it would have been criminal to not upgrade the brakes, Christian made no such error with a 320mm floating disc with Brembo 4-piston caliper taking care of the front end and a 200mm disc with two-piston upside down Brembo caliper out the back. 1980’s Yamaha wheels were not exactly pretty at the time, now that the 21st century has rolled around they look even worse, but the decision to do a spoke conversion makes all the difference and with a 110/80 18inch tyre up front and a masculine 160 section 17 inch item out back putting the power to the ground and grip in all situations now matches the capabilities of the thoroughly transformed TR1. Approach Fireball and you’ll see the hand tooled sider cover that wears the bikes name, you’ll see the lovingly formed headlight cover polished to perfection and the raw aluminium rearsets that like so much of this bike were made by Christian from scratch. Climb aboard and turn the key and the big V-twin rumbles to life, the sounds from the low slung box muffler echoing off the nearby mountains. Then crack the throttle and fire it into the nearest corner, trusting the handling of the Showa shocks and the Brembo’s should you over cook it. It’s been a hell of a journey today with Fireball, I didn’t get to ride it, but thanks to Christian’s imagination and skill we can all look at the photos and dream.