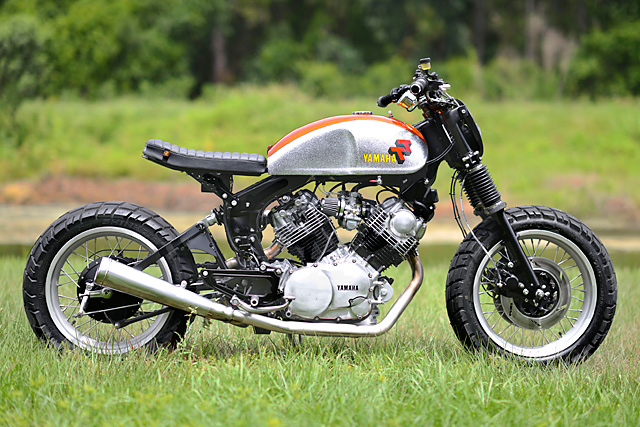 It’d be over five years ago that I first saw a café’d Yamaha XV. It was the same British racing green model that you’ve probably all seen by now, planted in a European backstreet across some scattered fallen leaves. Something in the back of my mind clicked, thinking it was a great reshaping of a forgotten middleweight cruiser. That was the last one I saw for a while but now, years later, it seems that they’ve been popping up with increasing regularity and with an increasing level of fit and finish. Heading up this accelerando of quality builds is Hageman MC in Tampa, Florida, who have wheeled out this scrambler-inspired 1981 XV920R. The bike started years ago with only one part – the fuel tank. Taken by the looks of the old XT500 alloy gas tank, Greg Hageman had the paint scheme replicated by local workshop Moecolors. It was an LSD-tripped version of the original, with some serious flake in the in the silver along the sides surrounded an obnoxious candy tangerine. It looked fantastic but Hageman MC didn’t really have a bike that it’d work with, so it was placed on a shelf to wait for an appropriate project. Fast forward a few years and Hageman already had the café racer look down pat with a slew of builds, so they took the opportunity to use the outlandish XT tank on something a little different. Greg says, “I’ve been building a ton of cafe racer Viragos and wanted to build an aggressive upright bike with more of a street fighter-style.” For pointers, he turned to another famed bike builder for inspiration. “A huge influence on this build was Classified Moto. I have a great deal of respect for their work and like their all-function style.” And he’s not the only one, as the work that Classified Moto do is excellent. Sure, their bikes all sort of look the same, but they’re so damn nice it’s okay to roll out a few of them. It’s like the bike building version of Oasis. To get the bike upright Hageman MC had to sure up the suspension for the new riding position. “I had Hagon revalve and build me a shock for the rear. We then built a set of proper forks complete with a Tarozzi fork brace to stiffen things up.” While at the bottom end they laced up the hubs to some new wheels, running a whopping 17×3.5 front and 17×4.25 rear to make the most of available tyre sizes. And also, y’know, because it looks mean as hell. The engine had a bit of attention as well, with Hageman fitting one of their own exhaust systems. Greg says “The exhaust is a two into one with a muffler I designed, and the bike has a low mellow tone.” The air and fuel system also had a workover. “I mounted a set of dual VM Mikunis with velocity stacks for the Handbuilt show, but changed the stack out for filters for the real world.” Like their other builds, Hageman wanted the bike to be “clean, simple and straightforward” so a new shorter sub frame was made up and a new seat fitted by Tuffside, with the resulting shorter lines giving the bike much of its visual lightness. Everything was powder coated in gloss black by faithful local workshop Profab. The mantra of clean and simple extend beyond frame and seat, with Tarozzi pegs taking point on the original mid set peg location while the electrics have been stripped and built around a Motogadget M-unit, running bar end indicators along with an LED headlight, tail light and rear turn signals. And above all that sits the XT-inspired tank, in all its garish glory. The upright stance of the XV might make it look a little like a scrambler, but Greg at Hageman MC is quick to correct that. “I’ve gotten some criticism for not putting fenders on this bike, let me stress, it’s NOT a scrambler. And I did offer the new owner a set of fenders, but he likes the bike the way it is.” And the owner absolutely loves it. “It couldn’t have gone to a better buyer. He loves the bike, understands what it was built for and uses it hard.” And that’s the way it’s supposed to be.